The beginning was difficult-I was in a traffic jam going to the airport! Would I get to the check-in in time? I began to get agitated and restless, and the clouds which had been threatening all the way, began to look darker and I grew apprehensive. What was I doing here? Why had I come? I had a feeling of foreboding. Was I headed for a disaster? Then suddenly, traffic cleared, and we went bowling into Heathrow just in time. There were traffic delays in the air as well, it seemed, and French and English controllers were having some kind of dispute. We finally made it to the runaway, but we had missed our slot, and the temperature in the plane as we waited was getting more and more oppressive. At last our plane was given the all-clear, and the now long queue of planes took off at high speed, and like peas in a pod we shot off into the sky, one after the other.

The journey across the channel was uneventful, but the cloud which had accompanied us all the way began to make the ride more and more bumpy as we crossed France. Obviously a bad storm brewing, and I became more and more depressed. As we descended into Bordeaux, over the confluence of the two great rivers, the sky took on a sort of yellow colour, and we seemed to suddenly lurch round the last bit at considerable speed, screeching to a halt at the end of the runway. I had arrived safely! Les Douanes1 were being extremely slow, and I was scrutinised rather closely as I went through. Do I look suspicious for some reason, it was creepy! I found out later that they were looking for some drug smugglers whom they caught next day.
By now I was getting late for my train, and I was getting worried about letting someone know that I would possibly be on the following one, as I was due to be met on my arrival at Bergerac. The clouds were getting darker, and more menacing, and thunder was rumbling in the distance. What have I got myself into now? Luckily the navette2 turned up at the bus stop as soon as I had found it, and I got to the main line station, just in time to get my ticket, and catch the train. As the train ran along, I began to practise my rather long forgotten French, and my depression took over again. I was going to an unknown family in the heart of the countryside, and I knew that nobody was likely to speak English. Oh, why had I come? The clouds looked blacker still, and the thunder seemed to be following me. Then the train stopped and I realised that I had arrived in Bergerac. I climbed down to the platform, and looked about me, not knowing what to expect next, when suddenly a young woman, who had been looking anxiously at a photo, obviously the one I had supplied, ran forward, and introduced herself in a great flow of French, most of which I did not comprehend, but I gathered that she was very pleased to meet me. I realised that my ear would take some time to become “en accord.” I wished that I done a bit more preparation before I had come, but we managed quite well on the car trip back to the farm, a few miles south of town. She said they were expecting a severe storm in the next few hours, and my spirits dropped again, wondering what was to befall me.

We arrived at a large gateway. “Voilá Le Saintonger” shouted the young woman, and we started the drive up a long winding lane, which was lined as far as I could see with large trees and bushes. With the storm clouds above, it looked very dark and foreboding. Then out of the gloom we came to the farmhouse. It was just as I had imagined it-a rather old crumbling building with shutters, and I wonder why the French never seem to do much to their old buildings on the outside, unless they are regarded as national monuments, when they scrub everything from top to bottom, and destroy the history. We stepped inside a very dark hallway, and the floor tiles felt very cold to my feet, and once more I wondered what was to befall me. An inside door opened and Madam H emerged with a welcoming 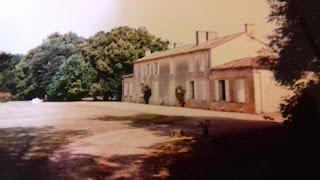 smile, and enquired anxiously about my journey. “Would you like a cup of tea?” Rather surprised, I said I should like that very much, and she bustled about showing me up to my room with my luggage. She appeared soon with a tray of tea, and began to pour. I thought the tea looked a bit odd and then I realised that Madame likes fruit tea, with rather more than a dash of milk. She then proceeded to tell me about the other guests, one of whom was another English lady who was to occupy the next bedroom. The next were the Rules of the House-no English was to be spoken in the house, at least within her hearing, after all we had come to improve our French. The furniture of the house looked as though it hadn’t been changed since the 18th century, and everything had an air of grandeur. I had noticed there was a supply of electricity, but I wondered about the plumbing. However, the bathroom which I was to share with Caroline was a little old-fashioned, but adequate. That evening I came down at the strike of the dinner gong (strict time keeping was another house rule), and met the family and other guests.

The young lady who had met me was Madame’s daughter-in-law, and she and her husband and two little boys lives in one wing of the sprawling building, while Madame and her husband, now retired, occupied the other with the guests. Everyone was talking about the worsening storm, and there seemed a desire to batten everything down. What will happen next, I wondered? Are all the windows locked, are the shutters secure? I wondered if Fra 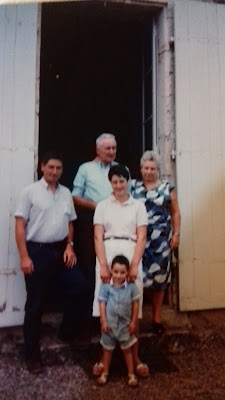 nce suffered from hurricanes? The answer came soon enough. Because I was very tired after my journey, I suggested that I should go to bed early, and after a really lovely meal, which encouraged me no end, I went to my room. The heat was stifling, and I decided that I should open the windows behind the shutters, which I pulled to, but didn’t fasten too well, I think. It was already pelting heavily with rain, but I finally rolled on to the bed and dropped off to sleep. Loud crashes, a banging as though a monster was in the room, woke me, and my senses were reeling! Was this the awful thing I had been worrying about all day? As I came to, I realised that I had broken the rules, and opened my windows, and released the shutters, which were banging backwards and forwards, in a violent manner. The rain had become large hailstones, and the lightening flashed and the thunder rolled. I got completely soaked fighting to catch the shutters and control them somehow. The rain poured into my room, and I struggled to mop it up. I feel I am in trouble; I can just hear Monsieur commenting on the stupidity of the English! I go back to bed, and in the morning am amazed to hear that everyone else in the house had gone downstairs during the storm, because of the thunder and lightening, and some people had water come through their ceilings, because tiles had blown off the roof. Outside, it was a scene of devastation. Trees were blown down, leaves had been stripped from their branches, water was everywhere, and the family were grieving for the nest of baby golden Orioles, which had been blown from its tree, and was completely destroyed. So began my stay with the family at ‘Le Saintonger,’ a certainly dramatic beginning to one of the best holidays of my life3. 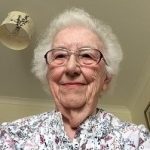