My posting, after being commissioned in to the Corps of Engineers of the Indian Army in 1967 following the Young Officers’ course, was to Nagaland1.

The Nagas agreed to join the Indian Union in 1947 on the basis of an agreement, the Naga-Hydari Accord2. A clause in the Accord stated that the Governor of Assam3as an agent of the Government of India will have special responsibility for a period of ten years to ensure the observance of the terms of agreement. At the end of this period, the Naga Council was to be asked if the people wanted the agreement extended for a further period or if a new agreement regarding the future of the Naga people would be required. In 1956, the Nagas wanted to review their status with the ultimate aim of seceding from the Indian nation. Basically the move was triggered by an abysmally slow pace of development in the Naga Hills. The Government of India maintained that the review did not include the option of secession but any other arrangements could be discussed within the framework of the Indian constitution. Consequently insurgency started in 1956. Nagaland became a Union Territory4 in 1957 and Tuensang district, earlier not part of Naga Hills, was merged with it. After protracted parleys, Nagaland became the 16th state of Indian Union in 1963. Though a ceasefire was declared in 1964, the Nagas were not satisfied with the arrangement and violence continued to erupt on and off.

The headquarters of my regiment was located at Chakabama, northwest of Kohima, the capital and my field company5 was located at Longmtare further east. The task assigned to my company was to construct an operational road from Longmtare to Kifre – a length of approximately 45 kilometres. Large columns of underground Nagas, with arms and ammunition, had infiltrated in to India after being equipped and trained in China. Units of Indian Army were trying to chase and apprehend them and the operational road was essential for the mobility of the forces.

The Nagas traditionally lived in villages that were divided into a number of clan territories.

A village was a well-defined entity with distinct demarcations. Every tribe had a separate dialect, which fostered a strong sense of solidarity within their respective villages. The people of the village were held together by social, economic, political and ritual ties and each village had its own identity. Tribal loyalties ascended all other considerations in social interactions to the extent that they could escalate to violent clashes and loss of lives. Villagers were very sensitive about their customs and traditions.

Our camp was located about a kilometre away from the village of Longmtare. The area had not been exposed to modern ways. Villagers had never seen a motor vehicle on the road though they had seen helicopters flying overhead! It was interesting to observe the amazement on the faces of local tribesmen when the driver of a vehicle poured water into the radiator. ‘Oh, it drinks water,’ they were heard commenting! There were two religious denominations – Christians (Christian missionaries had been very active in the state) and Animists who were commonly referred as non-Christians and worshipped their ancestors and nature – the sun and the moon. They had a local alcoholic brew known as Chhang – made from maize and millet. It was consumed liberally but the Christians never drank. It was a custom to offer Chhang – the local brew – to any guest visiting a village. Refusal to partake the liquor was considered an insult to the hosts, and in extreme cases, punishable by death6! 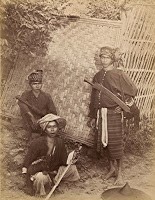 Longmtare had a village school and the headmaster was a person named James. He had studied in a missionary school up to fourth standard. He often came to our camp to seek help for going through an English Reader, normally assigned to a first standard class in any school outside the state. For example, on one occasion he wanted to know the name of a fruit – mango – the photograph of which was there in the Reader but he could not decipher the adjoining letters of the script. But, he performed his job diligently by keeping the children engaged in the school throughout the day. In fact, the church doubled up as the school and James was also the pastor. On occasions he also acted as an interpreter. The village had a Gaon Burrah – equivalent of a headman, called sarpanch elsewhere in India. His word was Law. According to local custom, he carried a red shawl around his shoulders.

We were terribly short of tentage and my troops were not adept at making thatched-roof bamboo huts locally known as Bashas. The first rain during the monsoon caused the roofs of our bashas to leak profusely. I asked the Gaon Burrah of Longmtare for help. He readily agreed. The next day the whole village came to our camp and within six to eight hours replaced the roofs of all our bashas. They did not demand any compensation or remuneration. All we had to do was to share our lunch with them!

One day as I got up and looked out of my basha, I saw the Gaon Burrah along with some villagers sitting in the compound of our camp. I was greatly worried. My apprehension was that someone from my field company may have done something to annoy the villagers and that they had come with a complaint. On asking, I found that they, in fact, had a complaint but of a different nature. The road that we were constructing passed through a neighbouring village but it skirted around theirs. It passed roughly 2500 feet away from their village that was located at a height of about 600 feet from the road. Their grouse was that the neighbouring villagers were teasing them that a motor vehicle has reached their village but Longmtare had been deprived of that honour! The villagers now wanted us to realign our road so that they also could boast of a motor vehicle having reached their village. Though, realigning of the road was not possible I told them to construct a link-road from our road up to their village and I promised them that I would get our Jeep to their village after that. They readily agreed. My aim was to buy time so that matters cooled off and the issue would die its natural death. But, to my surprise they were back the next morning with a report that they had worked the whole night and had created the required link from our road to their village. What I saw on ground was astonishing. They had marked the ends of the two sides of the so called link-road and had cleared the bushes and now wanted me to fulfill my promise. I did not have the heart to tell them that the link constructed by them was not good enough for the Jeep to negotiate. Therefore, I took my dozer to the place and made it climb in a zig-zag fashion up to a height on the hill slope. Thereafter, with the help of the winch of the dozer, we pulled the Jeep up some distance on the slope. Slowly, in about three or four stages, we were able to get the Jeep to their village where there was a flat ground on the top. The whole day was spent in giving Jeep-rides to the people -children and adults. The villagers were happy. Their honour had been restored and I had been able to keep my promise!

Eventually, we completed our task of constructing the operational road. My Commanding Officer (CO)

arrived from Chakabama to inspect the road. The villagers organized a cultural programme in his honour and also to celebrate the commissioning of the road. My CO and I were seated on a dais and the local boys and girls performed their traditional dances. As per the custom, a girl came and offered us Chaang in bamboo jugs. I being a teetotaler refused the drink without realising the consequences. Suddenly, there was hushed silence and it dawned on me that I was in deep trouble. But, my CO had the presence of mind and said that I was a Christian which was why I do not drink. Immediately the tension eased and a girl rushed to the adjoining hut and returned with some tea for me. My CO had saved me from a possible death that day.

I was posted out from Nagaland in 1969 and I visited the state next after three decades in 1999. I observed drastic changes that had come about in the state. Within just one generation the tribals had lost their innocence, their customs and traditions had undergone major transformations too. The Christians no longer abstained from liquor. The insurgency has lost its ideological thrust and control has passed on to ignorant brigands. The state has paid the price of achieving modernity! 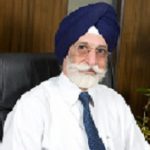 Brig. (Dr) Rajwant Singh Grewal, is a retired Army Officer, an educator and a former Vice Chancellor, who lives in Chandigarh, Punjab.