I was born in October 1918. My mother lived in Exeter, Devon and I was 2 and a half lb when I was born just before the end of the First World War. My name was Ruth Weeks.
I left school at the age of 14 (as everyone had to) and my mother, determined to make one of her daughters a ‘sewer’, sent me to work for Wippel and Company, the ecclesiastical outfitters. It was very hard work that sometimes went up to 12 hours, from 8 in the morning to 8 at night and all for 2 shillings and 6 pence a week. But then there wasn’t much money about anywhere. Houses cost as little as £400. I worked here for 5 years.
I met Bill Bradbury in 1938 at the Ida Tremayne’s Dancing School where both of us went to learn dancing. Speaking to a newspaper reporter who had come to cover our 70th wedding anniversary, Bill said, ‘ We had both gone to learn to dance and as I looked across I saw this smart bit of stuff with really lovely legs. I was absolutely smitten.’ I told the reporter how wonderful Bill looked with his lovely wavy hair. ‘It was love at first sight and nothing has changed with time, not even his hair.’ Bill was 23 and I was 21 then.
Bill and I married in 1940, when the Second World War had begun, after courting for 2 years. We went to Torquay for our honeymoon with only £40 between us. That didn’t leave us with much to do on our own.
My memory of the Second World War was rather traumatic. The house opposite to my mother’s was bombed, killing all the residents. The windows of our home were knocked out while we took shelter under the stairs, just a few paces away. The crater that was left by the bomb remained for more than ten years after the war ended.
Bill joined the RAF and served for six and a half years during and after the war. I often travelled to where he was posted. When he was at Duxford, I visited him; he had a sleeping night pass and I rented a room close by. It was a tiny place with a single bed. I went to see Bill in Battersea where he was posted next and again I rented a room. I went as far as Corringham in Scotland where he was stationed. It was only in the Island of Islay in the Hebrides that I couldn’t join him. Bill’s last posting was in Denmark before he was finally de-mobbed.
I had stopped working for the Outfitters and was now working for Hutton’s fashion shop at the top of Queen’s Road in Exeter, helping customers try on new clothes. I was soon called away by the government for war duties and had to work in a food shop, distributing food supplies. I was then put on the Observer Corps where we sat plotting planes that I didn’t like at all. When we were asked who would volunteer to work in the canteen, up went my hand.

After the war, Bill and I returned to Exeter. I managed a terrace house on Ferndale Road, St. Thomas for only £1000. Bill joined the Civil Service and was always taking exams to improve his position. He finally became the Inspector of Taxes in Inland Revenue. We lived in Exeter for 7 years and had our boys, Keith and Kevin.

But Bill’s job took him to different parts of the country. We moved to Sunderland in the north which was quite horrible. We stayed there for 3 years before moving to Southend by Sea in the south. Bill was next sent to work in Guildford, Surrey and we went to live in a beautiful house in Hindhead, 12 miles away. We lived here for 12 years. Bill retired when he was 59 and a half and we went back to living in Exeter where we bought another house.

My sister who lived in Oxford was married to a very wealthy man who owned homes in Portugal and Tenerife that we visited often. We used to go on cruises twice a year with my sister and her husband and my brother and his wife. When they passed on, we went on our own. On every cruise, we danced every evening and sometime in the afternoon too. We even won a prize once, a trip to Scotland but Bill refused to go so far north from Devon.

All through our lives, Bill and I danced at every opportunity. When I was 63, I participated in a dance competition and won a gold, a silver and a bronze medal for three different dances. My long shapely legs and fashionable clothes always attracted notice and admiration. Till I was 92, I had perfect health. After that my legs began to give out and I couldn’t walk without taking rest. And I haven’t been able to walk for long since then.

Bill died 4 and a half years ago at the age of 96. We were married for 73 and a half years. I had to move home to be close to my son Kevin. I brought my mats to put on the floor and my pictures are up on the wall. I live among people who are very friendly and kind. I am happy. My son and daughter in law visit me 3 times a week and are very caring. I live my days putting on the record player and the television. I am happy in my own company. I am always happy. May be, that is why I have lived to be nearly 100.
Author profile 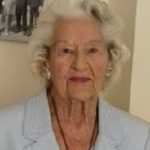