I was one of 7 children and we lived with our Dad, Mom and Grandmother. My Dad was a very violent man and ruled the house with his strap while my Mother was a very weak person. Ours was a rough and unhappy childhood. The redeeming feature for me, was the presence of my Grandmother whom I respected deeply; I wouldn’t have been the person I am, but for her. I hated being home and would try and stay away as much as I could and joined the choir group of the local church which got me to spend time with music. I met Stuart when I was 13 and we married very young, when I was only 17.
Stuart and I started our life together in a small caravan. I was 21 when our son Steven was born and Elaina, our daughter followed 4 years later. I was thrilled to be a Mom and was determined to be a better parent than mine had been. I didn’t want my children to go through what I had been through. We lived in Arbury where I did several different kinds of jobs including child minding and looking after kids during holidays. I had children from different parts of the world living with us for long months but when they left I felt very depressed and Stuart understood. So, when I asked him if there was space for fostering a child at home, he agreed. Steven was 12 and Elaina was 8, when my new adventure began.
I applied to the local council for permission and for a child who I could bring up. It was a long procedure. We had social workers coming over and interviewing us. My husband was a very reserved man and was often very uncomfortable answering some of the personal questions. Eventually we were approved and waited for the first child to arrive.

It was one Wednesday when the phone rang in the afternoon and I heard a social worker telling me that there was an emergency of some kind and that they had a little boy aged 3 and a half who had nowhere to go. We agreed to take him in. Wednesday and then Thursday and Friday came, but no little boy did. Then on Saturday a big car arrived at our doorstep and two social workers stepped out with a bawling child who had a huge head and a protruding belly. He was screaming and throwing his hands about and it took all the strength of the social carers to bring him out of the car and into the house. He just wouldn’t stand on his feet. I have got to admit, he didn’t make a pretty sight at all.

A doctor came around to check on the little boy and asked me to take his vest off. I discovered that the vest was two sizes small and wouldn’t come off easily especially from the body of a hysterical child. The doctor suggested that I take him to the hospital and so within an hour of placement, there I was in a taxi with the boy still screaming, headed for the local Addenbrookes Hospital with a letter in my hand. At the hospital, it took 5 strong hands to settle him down. He had his x-rays taken and the doctor looked at them and told me, ‘Just take him home and love him.’ That is exactly what we did but it needed a lot of doing. The experience of raising Jason and being with him opened my eyes to the world of children and the circumstances they could possibly be. It was also a turning point of my life.
Jason and I went home by bus. Stuart had laid out tea for us. As soon as he saw food on the table, Jason jumped up and grabbed whatever he could and started eating. In shock, we realised he must have been starving. After he finished eating, I decided to wash him so he would smell better. I put him in the kitchen sink over the draining board. I took off his clothes and again he started howling. His bottom was marked all over with what appeared like cigarette burns. He wouldn’t want to use the toilet and would scream something unintelligible. The social workers later told me that Jason’s abusive father caught eels and cut their heads off and put them in the toilet bowl. This little child would be petrified of the fish heads floating in the water. It took me years to make him use the toilet properly and clean himself. He was almost 8 by then. I would often have to sit and talk to him for hours while he sat on the toilet. He couldn’t move his bowels, so traumatised he had been.
Steven and Elaina were marvellous and never resented the fact that I spent a lot of my time with Jason. A year after he came to live with us, I fell pregnant. The counsellors suggested that we send Jason off to the children’s centre but I wasn’t keen at all. He was one of my family. The doctor was ever so nice and I was able to bring Ben home without having to send Jason away and he was so kind to the little baby. They are as close as any blood brothers can be.
Jason in school was another experience. He was still given to sudden outbursts of temper and therefore, was put in a new section for special needs children and he resented that. I always told him that if he felt angry or unhappy over something, he should immediately come home. Now, each child had to put up a picture of himself on the classroom board. Jason would take it down every morning. He hated being treated differently. One morning, I got a call from his class teacher asking me to rush to school as Jason had threatened to murder Lath. I hurried to his school and listened to both what the teacher had to say and what Jason told me. Lath had hit his head with his pencil box and that made him very annoyed and he decided he would go home. As he came down the stairs, he discovered at the front of the school door, a workman’s tool box. He took a hammer out and went back to class and told Lath that he would kill him. I turned to the teacher and asked her why she couldn’t sit Jason down and stop him. ‘But we are not allowed to do that,’ she answered. Anyway, the Head Teacher intervened and said they couldn’t keep Jason in school. He had to go to a boarding school; the thought broke our hearts.

The closest boarding school was Wilburton Manor school run by a Justice of Peace who turned out to be a very inconsiderate person. He insisted that Jason could visit home only fortnightly. We were given no choice. He was forced to stay there till he was 11 when we were able to move him to Littleton House School, Girton where the kind Head Teacher said he could be home each week. That made a world of difference to us and to Jason. While at home, I would always have him next to me, while I went about my chores. If I were cooking I would hand him a carrot to peel or if I was cleaning, he would be dusting too. I didn’t like him to be out of my sight.
Jason completed school and went to College and acquired professional training and skills. Through his teenager years, he went through the usual challenges and as I like to think, a dark tunnel, but emerged successfully, a very nice young man. By the time he was ready to move home, Elaina was married and like us, started her life with her husband in a caravan. Jason went to live close to them in another caravan, allowing his sister to keep a watch on him. All of us took turns to be there for him.

Being with Jason, I was made aware of the kind of abuse children face-physical, mental and emotional. He was kicked around by his father and had to endure regular belting. He did spend some time with his grandparents but when I went to visit them, I realised how dirty and unsuitable the living conditions were. But at least he was spared the rod. The experience of settling Jason in into our family, was one I decided to use for fostering and helping other children. I have lost count of the children who came to stay with us and spend part of their lives in our home. Every child was unique and each of them had a story. The common thread was the harshness and cruelty that they faced in their early lives.
Jason is 43 now. He is wonderful father to two children, a loving partner and he runs his own business of painting and decorating very successfully. Stuart died quite suddenly and unexpectedly 5 months ago. Since then, Jason comes to see me every evening. We have tea together. He gets my room ready for the night. I look at him and say how proud I am of him, never without my eyes being moist.
Author profile 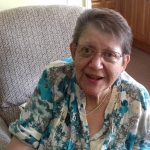