Here’s a, sadly blurry, picture of a painting that hung in my hotel room in San’a.  Now, this may seem like an odd choice for a conservative Islamic country, but not if you know that subject of the painting.  This is the legendary Queen of Sheba, of Old Testament, New Testament (sort of), Quranic and Ethiopian folklore fame.  While the stories surrounding her vary, they agree in that she is historically tied to Solomon; although that ranges from some measure of infatuation between monarchs that is told in the Old Testament version to the Quranic sura telling of how she accepted monotheism after meeting Solomon.  In the Old Testament she doesn’t even have a name other than the Queen of Sheba, but in the Arabic tradition she’s known as Bilqis (pronounced something like Belkees).  Actually, and not surprisingly, we don’t really know a lot about her, even down to the actual location of her kingdom.  Most people know of the Ethiopian connection, and that the Ethiopian royal family claimed its descent from her union with Solomon.  What is less well known is that the Yemenis make a similar claim, and one which I think has recently gained more historical credence.  Allegedly her state was centered around the Yemeni city of Mareb, which is often described as somewhere between “otherworldly” and “spooky”, and not someplace that Americans could really visit today.  This, of course, makes me want to go all the more.

The BBC brought news of another terrible suicide bombing in Sana’a, Yemen, which saddened me greatly.  I have this running conversation with my great friend Trish about the identity of the nicest people in the world.  Not surprisingly, our choices are shaped by the countries we’ve visited.  For years I’ve championed the Indians, whereas she promoted the Tanzanians.  Recently we’ve reached a meeting of the minds of sorts and decided that maybe it’s the Jordanians.  However, after my visit a couple of weeks ago to San’a I think I may have settled on the Yemenis.  My good friend Jyoti one time described the Omanis as God’s children, which is a description that I may borrow for the Yemenis. I’ve just never visited a place where the people were so kind. People would just stop me in the street to talk, and not the usual touts that made walking around in Nairobi or Cairo or Mumbai such a pain at times.  And when I told them that I was from the US (I never try to hide my national identity overseas 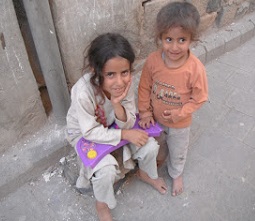 like some Americans – I mean, really, they only make this size one place) they seemed genuinely happy that I had come to visit them.  Through a series of events, I ended up getting a tour of a caravanserai from a tour guide, but he didn’t ask for anything – and refused the money I offered – because he said he enjoyed himself and he didn’t feel that he had done enough work to have earned it.  Many of the children would just yell “I love you” as I walked by.  I came across a couple boys, probably around ten years old, and one of them asked me, “where you from?”  I said America, and asked him “where you from?”  He was stunned by the question momentarily, until his friend doubled over on the ground laughing, and then he smiled so brightly.  They are all in my thoughts.

And just another picture of downtown San’a.  I was wandering through the streets snapping pictures of doors.  I’m sure that there are deep psychological reasons why doors, and for that matter bridges, fascinate me, and eventually I’ll include a post devoted to them (the doors, not the roots of my own subconscious hell).  Beyond the psychoanalytical door that it will open into my tortured psyche, I can also tell you that I just really loved the very distinctive knockers.  I looked for one to buy at the various markets in the souq 1, but, not surprisingly, they were all attached to doors, as they doubtless had been for centuries.  Anyway, as I was snapping away this gentleman came up and asked if I wanted to take his picture next to the door.  Well, he didn’t really know that much English, so the 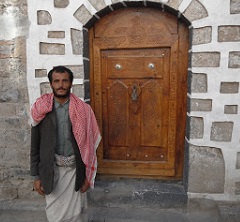 conversation was carried out mainly through sign language.  Often overseas, most notably in India or Egypt, when I’ve been in similar situations it was the precursor to a request from some tout for me to pay a fee for the right to have taken their picture (even if they initiated the exchange).  This just felt different, and it was.  I’ve made the point before that I thought the Yemenis were the nicest people I had ever met overseas, and this was just another example.  Apparently, he just saw that I was taking pictures and thought that I needed some help.  After I took the picture, and showed it to him, he just smiled, waved and went on his merry way.  A silly story, but just another example to show how often the doors are open, even for Americans in the Middle East.

I was fortunate enough to get a tour of a caravanserai, which is a sort of inn that was popular for centuries for travelling merchants.  They were especially important in areas such as the Indian Ocean where merchants were dealing with the changing monsoon wind patterns and thus might be stuck in one location for weeks if not months.  The caravanserai in Sana’a is in pretty bad shape, and is not even really open to the public.  My guide, provided by the nice Australian gentleman who rescued me when I managed to lock myself in my room, talked our way inside.  In the end he wouldn’t even accept any payment because he said he had too good of a time, and proposed that I could simply pay him next time.  I desperately hope I get the opportunity.  We’re in the middle of another worldwide travel alert, and much of the buzz is related to events in Yemen, which is sad because it colors the perception of people around the world about the people of Yemen, who, as I’ve stated before, are the kindest I’ve ever met anywhere.

I don’t know why I like this picture so much.  It’s not particularly framed well and the lighting is bad, but I just do – and as Gombrich2 would have told us, that’s all that really matters.  It just reminds me of the chaos of walking around Sana’a, Yemen.  I was showing my students a picture from Sana’a recently as we were discussing the nature of a portrait.  At a certain point one of the students asked, “Who did you go to Yemen with?”  I replied, “nobody.”  Several of them had a very perplexed look on their faces.  Their next question: “Who met you at the airport?”  I replied again, “nobody.”  For some reason they found the concept amazing, and it may be the only thing they remember from the entire summer.  Anyway, it’s just a shot of the maze of ancient narrow streets in Sana’a, and the constant need to look around every corner before turning.  I suppose there’s a metaphor here somewhere.

Here are two shots that are representative of the classic gingerbread architecture of Sana’a, which I loved.  So, here is a brief sampling of the new (well, the newer anyway) and the old (well, it’s all old).

A very nice young man by the name of Abbas showed me the “hotel.”  It is actually the remains of a very old (as is everything in Sana’a) caravanserai, and it was the second one he showed me.

The caravanserai were locations where merchants could stay of a night where their goods and animals would be secure. These were especially important in situations where a merchant might be laid up for weeks or months waiting for the monsoon trade winds to change.  Anyway, this one has been turned into essentially a hotel for donkeys.  They eat on the first floor and some of them have their own rooms on the upper floors.  I have no information in regards to room service or wifi.

2 comments on “Bilqis, the Queen of Sheba-vignettes from Yemen II”