Trying to organize my generally messy life, I was working my way through some old boxes and came across this flyer from the hotel where I stayed in Sana,a, Yemen.  I suspect I initially came across the Burj al Salam Hotel through a Lonely Planet guide, which is my traditional go to series.  This was over five years ago, a more peaceful time (at least by Yemeni standards), but even then the common wisdom was that you stayed inside the old city center(and, remember, this is Yemen, so we’re talking ancient), so I chose this family run hotel in the center of town as compared to the hulking modern monstrosity encamped above the city.  It was a great, although decidedly short, stay, despite my documented struggle with the door.  The horror inflicted upon Yemen by Saudi Arabia and ISIS and AQAP and, yes, the US, over the last couple years made the discovery of the flyer all the more poignant.  Immediately I visited their website, which was still up but didn’t seem to be working, and another more general travel site, and attempted to reserve rooms.  The message I received was that there were no rooms available, no matter what days I chose. The best news I received was a running message on the hotel website that read “Testing news coming soon.”  It would be sad if the grand old building were destroyed, but the word tragedy is better reserved for the death and destruction of the people of Yemen.

It’s amazing how a remarkably short little visit can stick with you.  As I’ve chronicled earlier I was only in Yemen for a weekend, and even then I didn’t really get out of the old part of Sana’a.  Nevertheless, it has stuck with me in a way that few other places have.  I’ve read several books on Yemen and obsessively follow their unfolding history/tragedy on the news and especially on Twitter.  And through Twitter I’ve actually been in contact with several folks, both inside and outside of the country, who have kindly answered my questions.  I set up a blog last year where I wanted to post actual Yemeni stories but in the end I was not able to track down any material from inside the country; truthfully, I think Yemen has more problems to deal with that answering requests from anonymous Americans.  That said, I don’t normally ever give up on anything so maybe I’ll pursue it again.  Lord knows the world needs a different view from the country other than the constant drumbeat of war.  In my Ibn Battuta class this semester I’m using three books by Tim Mackintosh-Smith who actually lives in Sana’a.  I’m a big fan of his work and if I had been more familiar with him on my trip there I probably would have tried to track him down.  Oh well, on the next trip . . .

Here’s the view out of my window this past Friday morning, looking out from room 601 of the Burj Al 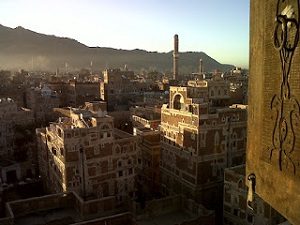 Salam Hotel onto the beauty and chaos of the old city of Sana’a, Yemen.  Why did I ignore the US State Department, the remonstrances of a couple close friends, and general common sense by heading off for Yemen?  Suffice it to say that I did due diligence and planned a very safe trip – plus, I’m pretty suspicious of anything the State Department would say anyway (grin).  The trip was great and Sana’a is absolutely amazing, and I can’t wait to head back.

My Imbecility: An Endless Series.

Sometimes I don’t really know how I make it through the day.  Here’s a picture of an enemy that proved to be way too clever for me to outwit.  Yes, it’s a door.  Specifically, it’s the door to my comfortable room in my nice hotel in the old city area of San’a. As you might be able to tell from the picture, it doesn’t have a lock, at least on the inside.  To open it you had to use one of those great big old keys (which I love) that was so large that you really had to leave it at the front desk when you left (no swipe cards there).  So, locking it from the outside was easily done.  However, what about on the inside?  Actually, that was deceptively easy.  The only lock was the hook, much as you’d find on a screen door back in the States.  That just didn’t seem like enough security to me, so I convinced myself that there must be more to it than that.  So when I checked in on Thursday evening I started tinkering with the lock (keeping in mind that there was no place to slide the key in on the inside of the door) when suddenly the deadbolt slipped into place.  Huzzah!  That was easily done, and it wasn’t until the next morning that I realized that since the deadbolt was in place, and there was no keyhole on the inside of the door, I was now trapped.  Not almost trapped or essentially trapped, but completely trapped.  It was early on a Friday morning, which meant that there was no one at the front desk when I called for help.  Obviously, this was after getting over my fear of being branded, quite correctly, as an idiot, by trying everything I could possibly imagine to get the door open, including carving at the old, soft wood with a bottle opener that I found on the mini-fridge.  Oddly, the bottle opener was shaped like a Christmas tree, but that’s another story.  Oh, and the fact that other folks had apparently tried the same carving approach gave me some solace.  And now I began to panic a bit; not that I was going to die there, but rather that after going through all the trouble of getting a Yemeni visa and planning my trip there that I was going to waste half a day trapped in my hotel room.  Naturally, in that situation, the best approach is to do something that Americans are very good at – get loud and smashy-smashy, and luckily someone heard me (which was pretty fortunate because there weren’t that many people in the hotel, but amazingly one of them was on my floor).  I heard an Australian voice calling from the other side of the door (keeping in mind that was around 6:00 in the morning on a Friday) asking me if I needed help.  More on my rescuer later.  Very quickly he had trotted downstairs, rallied someone at the front desk (from a deep sleep, doubtless), and I was freed.  Happily, after that clumsy beginning, the rest of the day was wonderful.

And So It Began

The old city of San’a is a confusing maze of streets, shops, mosques and squares.  Considering that San’a is often considered to be the oldest city in the world, this shouldn’t be all that surprising.  According to legend it was founded by Noah’s son Shem.  At the very least it is thousands of years old. It’s much like the old medina in Fez, Morocco, except arguably more convoluted, mainly because the buildings are tall enough to block your line of sight.  One of the reasons why I had chosen the Burj Al Salam (which is a first rate hotel, by the way) is that it is the tallest building in the old city, and thus I thought it might be easy to spot (yes, I’m just that naive).  Actually, the maze-like quality of the place is quite liberating because there’s no pressure to remember your way – you can’t remember your way (unless you’re born there, I suspect).  So you just march off into the maze and know that you’ll be magnificently lost in five minutes (at most).  I just picked out an old gentleman  and followed where he led me.  I figured this was as good an approach as any.

And just a few quick pictures that I snapped while walking through the labyrinth that is the old city in San’a.  I love the architecture, which I’ve often seen described as gingerbread, and I’ll include some pictures that do justice to that description later.  In the end I think I took dozens of pictures of doors alone, so that will end up being another post in and of itself.  Keep in mind that the city is thousands of years old, and most of the buildings in the old city are centuries old, if not a thousand years old.  It’s sometimes described as the city with the first skyscrapers because you have all of these six or seven story mud and brick buildings, which somehow manage to remain standings.  The Burj Al Salam Hotel where I stayed used to be a house which was eventually rehabbed into a hotel.  The streets, some only six feet wide, wind around and veer off in all sorts of odd angles.  A wonder place to get lost, repeatedly.  So, today just a few random pictures to give a glimpse into the old city.

Now, as anyone who has travelled with me can testify, I have a faulty if not outright laughable sense of direction.  Normally, if I say right, then your best bet is left – and a sharp left at that.  So you can imagine the challenge that a place like the old city of San’a would provide.  Again, that is one of the reasons why I had chosen the Burj Al Salam Hotel in the first place, figuring that since it was the tallest building in the old city I would be able to spot it.  Of course, there are so many tall buildings that close in around you that my plan went out the window in a hurry.  At one point I spotted a very distinctive door and knew with complete certainty that a simple right turn would lead me back to my hotel.  The rest was utterly predictable.

Second part of the story in the next post

3 comments on “Caravanserai – vignettes from Yemen”