Following is Suprobhat Bhattacharya’s story about what she had to endure while her husband was incarcerated:

In 1961 we were staying in No. 1 Ballygunge Maidan Camp. On  April 4, I asked him to buy tickets for a cinema show and went to 16-B, Prince Golam Mohammad Road to keep our younger son Prodosh (aged 4 years) with my cousin Nilima-di. At 3 p.m. a peon came with the tickets and the message that the Colonel would not come and had gone on some work. I tore up the tickets for “Spartacus”. Then, at 9.30 p.m. Mr. Swain of the Subsidiary Intelligence Bureau (SIB) came and said, “There has been firing at Bongaon. We do not know whether Col. Bhattacharya fired back or not, but he is wounded and captured by East Pakistan border forces.”

For two days we did not know whether he was alive or dead. Then from East Pakistan newspapers and Dacca Radio news I learnt that he had a bullet injury and was at Jessore Hospital.

On  April 8, the SIB Deputy Director, Mr. Sinha, came to tell me that same old news and said that the person accompanying the Colonel had returned home. He waxed eloquent on what tremendous anxiety that man’s family had been through. I said, “His family spent one night in anxiety and got him back. Here I did not get any news for three days and nights about whether he was alive or dead and today you finally come with the old news that he is in Dacca under military custody. You all are called the Intelligence Bureau, but are very unintelligent!”

The DD came again on April 15, and said, “Be prepared for a long separation.” On November 11, the
Colonel was tried and sentenced to 8 years of rigorous imprisonment. The first letter, duly censored, from my husband came after April 20, 1961. From then on, twice a month we got his letters and could answer them.

I began sending him The Life Divine, Part 1, in the form of sheets typed out by Pradip and myself. Later, in the beginning of 1962, I sent him the book through the lawyer Ghatak. Subsequently, I also sent him The Life Divine Part 2, the Letters on Yoga and Bases of Yoga.

For four years I hardly slept properly. I wrote a very angry letter to Mini in the Ashram in May 1961. I had no faith in God or man and did not respect the Mother. I kept arguing with Sri Aurobindo’s photograph, asking, “Why should an innocent man suffer thus? How is it just? How is all this for the best?” Pondicherry memories were sweet and sad. Sri Aurobindo was no more, so what was the point of going there? Life seemed a wholesale failure.

We had to suffer in many ways. The telephone was disconnected and his pay stopped because he was not there to draw or receive the pay cheque. In May 1961 there was no money in the bank. The G.O.C., General Mishra, sent Brigadier Kullarh to enquire after my financial and security condition. General Mishra spoke to Mr Sinha, “You handle large sums of money and when one of your officers is captured and the family is in distress you can’t pay ad hoc sum of Rs. 500?” Then Mr. Sinha came with Rs.500/- to be adjusted against his pay.

Luckily his pay was drawn from the army and it was regularised and Mr. Sinha was paid back. He said then, “You are lucky as from the army you are getting pay cover. We do not have even that.” One Major Moitra who had worked in SIB under my husband (he was the one to have gone that fateful day but felt very scared so my husband went instead as his boss) came to search my house for any papers. I told him that he never brought any official work or paper home, yet he searched and found nothing. He took away some army books and papers of my husband from Staff College days.

I went see the General Manager of Calcutta Telephones, Mr. Cornelius, who kindly installed a phone in my name immediately which still exists.

In 1962 I finally received permission to see my husband in Dacca Central Jail. He wrote to me, “Do not bring both the sons—only one.” On that first visit I took Pradip (then 15). In 1963, I took Prodosh (then 5 years) with me. He did not like to see his father in jail and asked the embarrassed jailor, “Why have you kept my daddy locked up?” He refused to sit in the visitors’ room inside the jail, but returned to the vehicle outside until his father had to return to his cell and I had to leave.

I had been to see Dr. Radha Binode Pal of the International Court of Justice who was a great help. He came to my house after the conviction when Dr. Rani Ghosh, Principal of Gokhale Memorial Girls School came with the M.P. Mrs Renuka Ray. I spoke out my mind then, hearing which Mrs Ray said to Miss Ghosh, “Has he been tutored?” Dr. Pal wanted me to accompany him abroad to get me out of my depression, but no passport was issued to me as the government feared I would do propaganda against them!

General Mishra was transferred for having taken an interest in Col. Bhattacharya’s family’s welfare. Other officers and their families were banned from visiting us. I was ostracized and watched by the Intelligence Bureau, whose Director was Bhola Nath Mullick. But the hardest part to bear was when his case was discussed in Parliament where facts were omitted and distorted. Nehru even stated that as he was a retired Army officer (!) the government could not help. He told my mother-in-law and brothers-in-law that my husband had crossed the border. Bharat Sevashram swamiji told my mother-in-law that in Dacca Col. Bhattacharya lives in a bungalow, plays tennis in the evenings. All this was in 1961 after the kidnapping of April 4, and his removal in 1962 to Dacca Jail. Hearing all this, she did not believe my words but rather her Swamiji’s words (such disinformation used to be put about by the Intelligence Bureau because of the outrage in the national press over government’s inaction). I lost all respect for Bharat Sevashram and the talks and behaviour of their maharajas (swamis).

Finally, government chose a lawyer (Ghatak) who was not an expert in this type of case to go to Dacca to defend him during his trial. When he returned, his wife told him within hearing
of others, “Well, you got him 8 years, didn’t you!”

In 1964 the Colonel was operated upon for piles. When I went to see him, he was emaciated. He told me that during the operation he became separate from his body, saw it lying on the operation table and asked himself whether he should get back into it. He did not like the idea very much. I did not know that he had not been given the medicines which had been regularly sent from the Indian High Commission. Nor had the Deputy High Commissioner bothered to check up.

The same year, on October 31, 1964, he was released and taken straight to Delhi. I was informed on the phone and his suitcase was returned to me. He came home in Diwali, November, followed by Ananda Bazar Patrika1. Pradip had run to the entrance gate of Ballygunge Military Camp and got into the car bringing him back. I cannot express my feelings at that time. I found his health ruined. He could not handle money or even drive his precious car which I had managed to maintain somehow for him to find on his return. He practised regular meditation in the early morning and evening and even at midnight. He had really done sadhana in jail and could even feel Sri Aurobindo’s presence. He wanted to come to Pondicherry but my mind was afraid.

January 1965 he was asked by his army Colonel to go to Jabalpur S.T.C. We packed and bought tickets. At noon came another order to go to Delhi and in the evening yet another order to go to Kashmir. Then I said, “This is very funny treatment by the army. They can’t decide where to put you. If you again leave for a non-family station, what happens to the sons and their education? I request you to resign from the army.” I actually gave him an ultimatum.

He wrote to General J.N. Chowdhury who accepted his premature retirement with full pension. General Chowdhury ensured that the unjust remarks recorded in his confidential report by the Intelligence Bureau chief, B.N. Mallick, were expunged wholly.

The Colonel then took a job with Voltas in Calcutta. In December 1967 my husband took one month’s leave and both of us went to Rameshwaram, Kanyakumari, Trivandrum and Thiruvannamalai. Everywhere he offered puja and took a bath as he still felt unclean after living for four years with thieves, dacoits and murderers.

On December 27, we reached Pondicherry, our second visit after 19 years. Sri Aurobindo was no more but I never felt so. December 29, was Mother’s Balcony Darshan. When we went to the Mother on January 5, 1968 she stretched out her hands to take the flowers. I broke down and could not stop the tears, weeping continuously, unable to see her face, thinking, “How mistaken, how blind I am! What can I give, Mother! I am not fit!” Mini’s welcome was warm, because I had not hoped for this. I got a lot of peace. Later my husband told me, “I saw Mother look at you so lovingly and felt jealous!” When he knelt before the Mother, he told me he looked straight into her eyes and saw her looking at him sternly, and prayed to her, “Burn all impurities, Mother, purify me and make me suitable for your yoga.” He felt a burning sensation inside and saw a small figure of Sri Aurobindo seated in the centre of his forehead (the ājña chakra).

This darshan was a unique experience for both of us. I had been filled with an insensate desire for revenge against those responsible for the betrayal of my husband into Pakistani hands and all the suffering that entailed for him and us. It was a feeling I did not wish to let go. I nursed it, yet it began feeling like a terrible load bowing me down under it. After this visit, it suddenly vanished, relieving me tremendously.

Over the years my husband’s views continued to change in spiritual matters and his faith
in God grew and grew to the last. During his second heart attack in July 1988, even in a state of
semi-consciousness, he exclaimed thrice, “Oh! Bhagwan!” When I told him of this later, he
repeatedly asked me to recount the incident. He was delightfully surprised, for he could not
believe that he had so much faith as to call on the Divine even when not in his waking
consciousness.

On September 4, 1988 he passed away suddenly at 11.45 p.m. My individual life ended on that day. It is a great consolation to me that I was able to keep my promise to him that I would be with him till his last moment on the earth. 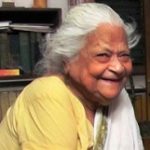 3 comments on “The Turn of the Wheel: Suprobhat’s Story”