In a two part story, June recollects her childhood, her adulthood and the adventures of travel

It was Sunday morning September 3, 1939, and I was in church with my parents when the minister got up in the pulpit and announced to everyone that we were at war with Germany. I was only 12 years old and not sure what it meant. When we got outside, the sirens were sounding and I felt a bit scared thinking we were going to be bombed straight away.

It had already been agreed that my parents wanted me to be evacuated to a safer place in the country as we lived in Leith Edinburgh.

Within the next few days, I together with some of my school friends were put on a train to some place called Selkirk which was about 40 miles away. It felt very strange and we all missed our family but settled down in our new homes and schools. I had a toothache one day, and was taken to the school dentist. He gave me a big balloon to blow up and I went off to sleep. When I woke up crying I wanted to go home to my mother. The dentist had taken out two of my teeth and it was hurting. In the next day or two, my mother came and took me home to Edinburgh.

I had only been away about 4 weeks but I was glad to be home again.

I had just passed my 11 plus and was due to start a new school further from home. I had to get two trams to get there and I did not know anyone but soon made friends. It was very strange because we did not have many male teachers as they had joined the forces. We had some half days when no teacher was available until the school got around to getting some of the retired teachers back. However, my education continued in a rather spasmodic style for a while and I went to Business College before starting work in an office, dealing with Doctors and insurances; this was before the National Health scheme came into force in July 1948 founded by Aneurin Bevan. I also did voluntary work in a canteen making sandwiches and tea for some of the airmen stationed nearby. These were young men training for aircrew and they wore a white flash in their cap; this rather attracted me as a 16/17 year old. However, they were only there for 3 months and a new lot would arrive for us to get to know. We wrote to some of them and I eventually married one at the age of 21. Most of them had been abroad for two years.

We moved down south and bought our first house in Ruislip, Middlesex.

We had two children-a boy first and a girl, five years later and had a busy life and moved house a few times to suit my husband’s job. We did not have much of a social life together as my husband was not a very sociable person. (I don’t think men are so good at making friends as women) My son went off to University and my daughter moved in a flat with some friends. I was working locally in a government office and would go out socially with friends in the evenings and over weekends. This was my entire social life, at work mainly.

I was happily married for over 25 years and had lots of holidays when the children were growing up. We took the children to see the grandparents in Scotland; we also went on caravan holidays and we went to a B&B in Devon. When the children were older, we took them to Lake Como in Italy, the first time we flew. But once the children had left, I was lost. I wanted more out of life. I enjoyed travelling and seeing different places but my husband was never keen and I was the one that suggested and chose holidays. I don’t think my husband had holidays when he was young but my parents always took me on holidays even when the war was on.
I was only 50 years old, so had a while to go. I was invited to appear before a promotion board for an interview for a clerical job in London. I passed and was sent to work in London which I found quite exciting and interesting and the extra salary got me thinking, if I could manage on my own. When I settled down, I thought I could perhaps go it alone and have the social life that I never had at home. So, I decided to go it alone and divorce as I was quite ambitious and wanted to do other things.
June lives in Cambourne
Photos from Google.com
Author profile 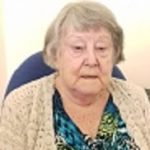 June Rodd is a retired professional who lives in Cambourne.