An Internship is when we are the doctors in training. It is an extremely exciting and exhausting one year when we are finally given responsibilities. Spending so much time with patients, we automatically develop a bond with those under our care. Technically, they are under the care of the senior doctors, but we start believing ourselves to be able clinicians. An intern’s day in the hospital is very busy. Sometimes it stretches from forty-eight hours to seventy-two hours, depending on the workload of the department.

I was on night-duty in Lady Hardinge Medical College, with a middle-aged woman recovering from a major surgery. I was alone with her in her private cabin. The nurse would come every hour to take her blood pressure, pulse rate, and temperature. I was to call the clinician-in-charge from her residence in the hospital campus if I noticed any alarming signs of distress in the patient. She was semi-conscious, drifting in and out of consciousness, asking for water, or just clasping my hand if I was near her. At one time, she told me to take out her copy of the GITA in Hindi from the drawer and read it to her. I found it in the bedside drawer and started reading from it. She suddenly propped herself up on her pillow, looked happy and kept telling me to read on. It was a strange scene that unfolded before me. The lady, who had been semi-conscious all the while, now had a beatific smile on her face. Her eyes were bright. Happily, she said in Hindi, “See! He has come to take me home. My husband has finally seen how lonely I was without him. Look, he has brought Sri Krishna with him! Such a stunning sight to see Sri Krishna on his chariot all decked up! Can you smell the beautiful fragrance of jasmine, marigold, and incense?  I am feeling so happy and at peace.”

I may have been too stunned, but I could also get a whiff of a sweet fragrance wafting in. Was it my imagination?

She collapsed as suddenly as she had sat up. I felt her pulse was thready and the blood pressure falling. She was perspiring profusely. I sent the call-book with the attendant to the in-charge. She came immediately and we all tried to revive her, but by then it was too late. She was no more. She had gone home.

I started as a House Surgeon in the Plastic Surgery department of the Presidency General Hospital Kolkata, popularly known as PG hospital/SSKM Hospital.

It was an ordinary day like any other when I got a message from my mother that a distant relative was admitted in the Emergency with severe respiratory problem. I rushed off to see her and found that Promila had been admitted in the Respiratory ICU with respiratory paralysis. She was diagnosed with Adult Polio which affects the respiratory muscles instead of the limbs as in children. She was twenty three years old, married 6 months back and was 3 months pregnant. She was Lord Sinha’s grand-daughter and the only child of her parents1. There was a shortage of house surgeons in this unit, so the Head of the Department requested me to also be on duty here daily for some time. I had to juggle two workloads.

A few days later, an old lady was admitted in the plastic surgery dept with a leg injury, for skin-grafting. A tram had run over her leg. After the fracture was treated, she needed plastic surgery. She asked me about Promila and said she had been her nanny and had looked after her since birth. I kept conveying love and hugs and concern between the two every day as a routine. Promila could not speak due to the paralysis, but she would write few lines of a loving note for the 90 year old nanny. It was a hopeless situation for Promila, but the nanny was improving.

Promila’s husband would be around sometimes, flicking through film magazines but never showing concern for his newly wedded wife. I found that strange. After a fortnight, Promila passed away. I went for duty in the morning and found the bed empty. She had passed away at night. I went on my rounds in the plastic surgery ward. The nanny asked me the usual, “How is Promila today?” Without making eye-contact, I lied, “She is better.” I was thinking that I would sit with her later and gradually break the sad news. She caught hold of my arm and said, “Don’t lie to me! Promila came to me last night to say goodbye. She was here for some time and said she is very happy and not in pain anymore.”

The memorial for Promila was held in their mansion on Lord Sinha Road. The doctors and nursing staff were all invited by her parents. On the wall alongside the ornamental staircase of the house, were hung framed pictures of the Sinha ancestors. As the nurses climbed the stairs, some of them stood in front of a framed picture and asked whose picture it was.  They were told it was Promila’s grandfather. The nurses, who were on night duty when Promila passed away, said, “This gentleman came last night and wanted to take Promila home. He was unhappy to keep her in the hospital any longer. When we asked him how he had entered, as visitors were not allowed at that time of the night and the outside doors were locked, he grew angry and insisted that she be discharged immediately. By then Promila was sinking, so we started attending to her, adjusting the respirator, oxygen etc. But in a little while she passed away. The gentleman was nowhere around. He had just vanished.” The framed picture was of Promila’s grandfather, who had died decades ago.

Promila’s husband came to claim the property of the Sinha’s as a grieving widower. Very soon he remarried and his new bride was decked in all of Promila’s trousseau. 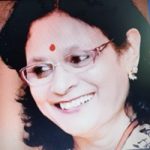 Dr. Nandita Ray Bhattacharya is a Pathologist. She lives in Kolkata.