I had always been struck by the large portrait of a man, that hung over my grandmother’s sitting room. I visited Gran several times in her apartment in 350, Edgware Road but never had the occasion to live with her and never got around to ask who the man in the frame was. What seemed unusual was his hooked nose that made him look somewhat different, or so I thought when I was young. My memories of Gran are of a very kind and generous person. I knew that she was from a Jewish family.

I was born in 1931 in Lambeth and shortly after was sent off to a foster home with my older half brother (from my father’s first marriage), Ken. We were raised by Mrs. Richardson, who was a lovely kind parent to both of us. In 1941, two years after the war broke out, we were asked to evacuate. I was 8 when I left Mrs. Richardson and moved with my maternal grandmother, Elizabeth Louisa Gibson to live in Devon. We stayed there for some time before returning closer to London. My grandmother took up a house at 62, Clarence Avenue, Gants Hill in Ilford Essex and I was to stay with her. I was 13 when we moved again. This time to Bedford where my parents acquired a pub at Riseley, George and Dragon with rooms on the floor above. It was the first time I had come to live close to my parents. At 13, I guess, I was quite handy at cleaning and scrubbing floors. My grandmother and I lived above the pub till she found herself a cottage and took me along, to be with her.

Ray Clarke lived in the next village called Swineshead, and often came to the George and Dragon for his pints. We met, fell in love and married at the Bedford Registry office in 1948 when I was barely 17.

I was very glad to be married and have a place of my own. Our first home was at 2, Brook Side, Kimbolton. We used oil lamps and had to fetch water in buckets from the tap outside. There was no electricity and no running water.

As I grew older I became curious to learn a little more about Gran and put together with the help of my niece, Teresa, few known facts. My grandmother, Pauline Azulay was born in 1877 in London to Isaac Henry Azulay and Clara Isaacs who had married in the city of London in 1866. Pauline trained as a dancer and performed at the Metropolitan Theatre, (which has since been pulled down) on Edgeware Road. She met her future husband, my grandfather, George Marshall who was an electrician working at the Metropolitan Theatre. George was born in Great Yarmouth in Norfolk in 1873. Pauline and George married in 1904, the same year their son, my father, Albert Earnest Marshall was born. If his sudden and unexpected arrival hastened the marriage, one is not sure. Grandfather George soon left the theatre and joined a coach firm and took care of electricals on buses. My father grew up in London where he married Mabel Lillian Gibson, my mother.

We tried tracing the Azulay family as far back as we could from the internet sites. The oldest member of the Azulay family that we had any information on, was Hayyim Joseph David Azulay who born in 1724 in Palestine and married Sarah, four years his junior in 1749 and lived till 1806. Sarah died young in 1773. One of their children was Isaac Zerahiah Azulay. It is difficult to establish how they were related to Raphael Isaiah Azulay, my great, great, great grandfather who is the farthest we have been able to reach in Pauline’s family tree. Raphael Isaiah was born in 1743 and married Shimoha Leonini. We have no knowledge of where they were born or where they lived and died.

Raphael lived to be an old man and died in 1830. His son Isaac Leonini Azulay was born in 1787 either in Italy or in Jerusalem. It is not unlikely that some members of the family migrated to the Mediterranean country. But what we know for certain is that Isaac Leonini Azulay died in September 1840 in Middlesex England. There appears to have been a community of Jews in Middlesex because granny Pauline’s mother Clara Isaacs was born in 1841 in Middlesex1 too. She married Isaac Henry Azulay in 1866 in the City of London.

I would love to have more conclusive evidence for putting together the story of my grandmother’s side of the Azulay family. I have no legacy of her apart from her name. But when I look at myself in the mirror I find my nose somewhat longer than a usual English one and reminiscent of the mysterious Hayyim Joseph David. Now, that is a legacy indeed. 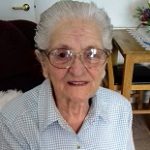 2 comments on “My Jewish Legacy”