Among the countless revolutionaries who participated in the struggle for Indian independence from British rule, many have become well known while memories of some are lost in the turmoil of political transition to modern India. My father was one among the latter and I feel it is imperative that he is remembered with reverence and his story told.

My memories of my father Deben Chandra Dey1 is of a strong and fearless man. Even as a child, I was aware that he was someone of importance within the Congress Party2. There used to be a constant stream of visitors waiting to meet and consult with him. My mother, Roma had to be on her toes to make them welcome. I sometimes felt alone and left out, till my brother was born. It was much later that I learnt that he had been the Chief Whip and the Deputy Home Minister in the provincial government of West Bengal during Dr. B. C. Roy’s tenure as the second Chief Minister in independent India. It feels good to know that his photograph continues to grace the walls of Writers Building3 in the Chief Whip’s room4.
After becoming a member of the Legislative Assembly (MLA), Deben Dey used his privilege to establish schools for boys and girls for poor slum dwellers in and around the area they lived on Lynton Street in Calcutta5, where the family resided. The schools exist and function under government grants even today6.

I was a few months old in 1946 when the violent communal riots between the Hindus and the Muslims broke out in Calcutta. My mother later would recall how she and my father were forced to shuttle between places for safety. She had to carry bottles of milk, a bowl and the traditional spoon called jhinuk to feed me. Similar incidents occurred later during 1950s riots which I remember quite clearly. My mother told us how my father saved the lives of many Muslim families during both the riots7. The sound of conch shell8 that heralded a Hindu-Muslim riot, haunted me for quite some time and even now it brings back fearful memories of the time. My narration of the memories associated with Baba, as we called our father, is mixed with strong emotions. I was only eight years old and my brother four, when we lost him.

My father’s morning rituals began at four in the morning with swimming in a pond which was within the compound of our home. He used to gather together girls and boys from the neighbourhood and teach them to swim. I learned to swim with him at the age of five. Proper modern swimming pools were rare in India. He had excellent health and was regular in his exercise and work outs. He drove his own car to office at the Writer’s Building and refused to have police escort with him. He abhorred any obvious display of privilege like the read beacon or pilot cars, as all ministers were permitted to have.

Deben Dey joined the freedom movement quite early in his life. He became a member of the Anushilan Samity, an organization devoted to inspiring the youth, which later came to be associated with growing militancy in nationalist resistance in Bengal. He was initiated and trained by some of the leading mentors of the time9. As one of the youngest members, he was referred to as the young boy (khoka) by the rest.

As he grew older, Deben chose a middle path and became an admirer of Mahatma Gandhi. In a letter to my mother from his trip to Geneva, he mentioned how he was shown a lot of respect being an Indian and was often asked to speak on Gandhi. However, as Deben believed in an egalitarian society, he was at times dismayed by Gandhian leadership and feared that the Congress cabinet in Delhi was turning into a ‘capitalist caucus.’ In his own capacity, he always upheld the rights of ordinary people and the need to address their grievances and demands. His role during the riots that wrecked through the city of Calcutta in the 1940s and 1950s, was singular. He was specially assigned with the responsibility of conducting anti-riot campaigns, by the Chief Minister, Dr. B.C. Roy. Our family was protected by local Muslim leaders just as we gave shelter to members of the local Muslim families.

In Calcutta, whenever Deben went out to buy provisions, he would end up inviting friends and relatives for meals. There was rarely a single day when his family members ate their meals by themselves. Roma found her husband always surrounded by Congress party members, relatives or friends. And before 1947, he was always on the run. I can understand my mother’s plight and feel her pain of not having her husband in times of need.

After independence, in active politics, he turned a grass root level leader and negotiated with different political groups in the province of West Bengal, tackling sensitive and critical issues of religion, party politics and power. As Member of Legislative Assembly, he went to Germany from where he wrote letters to my mother. When I read some of these as a young adult, I was amazed. One said, I have “…left you empty handed.” In today’s India, a Deputy Home Minister’s family waiting for money to run the household is unimaginable. As an active member of the revolutionary groups fighting for freedom, Deben often had to disguise in order to escape capture by British police. In one instance, he wore a sari and another time a burqa to evade imprisonment. He escaped under the pseudo name “Shaikh Kaloo” and travelled to Singapore, Malay, Java to finally reach Burma. There was an arrest warrant issued in his name; he was branded ‘a dangerous terrorist criminal’ and a reward of 1000 rupees was announced for anyone who helped in his capture. Deben was ambidextrous and could shoot with equal adeptness with either of his hands. Unfortunately, we his sons learnt from others and what my mother in her deep anguish recollected, his acts of courage, gallantry and deep commitment to the cause of his country. He was an excellent driver who on several occasions had driven Subhas Chandra Bose10, to several secret meetings and hide outs at all hours of the night.

I so wish my brother and I could have listened to more of his adventures from him. But that was not to be. That day was like another. Deben was driving to Krishnanagar a town, 113 kilometres north of Calcutta with three other members of the Congress party. Roma knew nothing of the purpose of this journey. She received a call in the evening that her husband’s car had met with an accident and that he had been admitted to hospital. My mother and I were taken in an ambulance to Krishnanagar. Baba was critical but conscious. The Chief Minister, Dr. Bidhan Chandra Roy rushed too and being a doctor oversaw every effort made to treat him. He was alive for 48 hours before succumbing to his injuries on the 1st of November, 1954. He was only 49 years old and my mother was 35. In the 48 hours that he lived, his wife Roma wasn’t allowed to go near him. He was busy speaking to Dr. Roy.

Later Roma learnt that Deben was on a secret mission to unearth some improper activities that senior members of the ruling party were involved in. We never knew the truth or the details. It was the beginning of grim, dark days for my mother and for us brothers. The Chief Minister, Dr. Bidhan Chandra Roy grieved at the death of Deben Dey on whom he depended a lot. The Prime Minister, Jawaharlal Nehru expressed his shock at his untimely and tragic death. Friends and admirers condoled his passing away and many felt he would have been the person to succeed Dr. Roy as the Chief Minister and that the politics of Bengal would have been different had he taken charge.

Nothing of this consoled his young widow and her two young boys as they struggled to find their feet with little government support. She moved home to a lesser developed part of the city and it wasn’t till 1973 that she was granted freedom fighters’ widow pension. She never believed the incident to be an accident because her husband she knew was an excellent driver. Roma was convinced that her husband, the dynamic Deben Dey, was a victim of political crime and till the end of her life could not come to terms with the tragedy that it was never investigated adequately. The mystery remains unsolved and we members of the Dey family are still waiting for some kind of a closure. 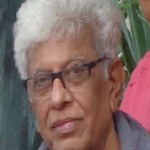 Tirthankar Dey is an entrepreneur who lives in Kolkata.