Till I was sent to a College Hostel in Darjeeling, I had never been away from the family. We lived as a joint family in the foothill town of Siliguri1 and I was always special by default. I was the first child of the first of five siblings on my mother’s side. I was, therefore, my grandmother’s favourite, ‘apple of her eye.’ I imagine my cousins still hold this against me. We all called her Ama (mother). I was the one who always got to sleep with my grandmother and the one who got to lick her fingers when she had finished feeding us boiled rice, mashed bananas and sweet milk. (I have never again tasted anything so divine). But, my grandmother always reminded me that it was my mother who had been special. She gave birth to her first daughter after she had propitiated every conceivable God and Goddess in the Hindu mythology, in addition to being aided by some basic forms of ‘tantra-mantra2’. In three successive years, she lost three sons within days of each birth. “One had his arm right up to his knees with a full head of dark, curly hair. He had the looks of God Indra – the king of Gods3,” she would often recall.

As I grew older, I noticed my grandmother grew melodramatic and somewhat maudlin from around 6 in the evening till the time she went to bed at 9. She would weep intermittently sitting on a rug on the floor near the foot of the bed. I would be on the bed doing my homework or just lolling around with the ‘kolbalish’ or bolster. My grandmother and I shared a bed till the time she got very ill a few months before she died in 1989. During these nocturnal blubber, she moaned about how unfair the world had been, about wars and diseases, about hunger and pain, about wild animals and passages through thick forest and about her life and its disappointments.  Sometimes I wept with her and sometimes I drifted to sleep to her sonorous voice and the rhythmic sound of the ceiling fan. It was later that I came to know that  she had had her regular ‘peg-or-two’ from the bottle hidden under the bed. It was a chance discovery while searching for something behind the trunk under the bed. I took the ‘Shangrila’4 bottle to my mother because ‘she was the headmistress of a school and knew everything.’ Apparently, it was no secret to the family but I was instructed never to look behind the trunk or under the bed again.

From then on, I slowly mastered the art of egging my grandmother on to relate to me her experiences and share her innermost feelings. She told me about her wanderlust husband with whom she had been on the move ever since she married him in 1940. Her name was Narbada and she belonged to the Thapa family from Kohima5. My grandfather, Run Bahadur Karki was popularly known as the Manipurey Karki (the Karki from Manipur6). Both the Thapa and Karki clans belong to the Chhetri caste (the warrior Kshatriya caste). Run Bahadur had been working in Burma when the Second World War broke out and they were caught in the cross fire between the ‘Japanese’ and the ‘British.’ ‘The Azad Hind Fauj7’ was with the Japanese,’ she would add, before breaking into a tuneless ‘kadam kadam baraye ja……8’ At times I felt she got her facts muddled.  The young couple moved back to Kohima and then to Imphal, capital of Manipur. But the war seemed to be following them wherever they went!

Finally, they moved through Assam9 and landed up in Siliguri which had in those times,  large stretches of forest land. They first settled at a place which is now the Venus More (crossing) in Siliguri. Here they built their home and raised a family. This was around 1944.They later shifted to Ashrampara (another neighbourhood) because the school for children was closer. I still remember, till much later, there used to be a ‘Burmeli busti’ (Burmese village) in the heart of Siliguri town.
They were a small group of about 15 people who had migrated carrying pieces of gold and ‘cheura’ (flattened rice). They had walked through forests, stayed in ghostly, abandoned dak-bungalows10, done odd jobs and survived. They made makeshift houses on banks of rivers. They had been robbed and beaten. A few died of malaria on the way. And during all this, my grandmother’s second son was born in a hut along a river. He died on the third day. The young couple had gone to the river-bank to bury the dead child. It was here that my grandmother had seen the vision of Hanuman, the monkey god.

“We had just buried the child and I had stayed back at the river to wash some dirty clothes. At first it was just a distant hissing sound. It grew louder and a shadow fell over the land. The sound was directly above me and the sun got hidden. I looked up and saw Lord Hanuman as clear as day. The shadow then moved towards the little grave and hovered over it. It then disappeared,” she often told me with a tinge of sadness. I loved hearing this story and must have made her repeat it a dozen times. As I grew older, I attributed the vision of Hanuman and the hissing sound to her post-delivery trauma. She must have fainted, I have always rationalised. But her description was so vivid that the vision appears clear in my mind’s eye.

In the imagination of a teenager, I romanticised my grandparents’ lives as they triumphed over all odds to love and to live the life they wanted to. I imagined my grandmother as a bold, wild and beautiful young girl, risking everything for the love of a man. And she loved the forests too. She would fondly reminisce collecting nuts and berries from the forests along with her sisters. She could imitate the sound of wild animals and claimed that she and her sisters could communicate through them. Although I only saw her as a widow in white saree, I imagined her to be quite stylish during her time. She always had ‘puffed’ and coiffured hair. She worshipped the Nehru family11 and religiously read the daily Hindi newspaper. She talked about ‘the emergency’ and vehemently justified Indira Gandhi12 for imposing it. She could easily slide into a political discussion with guests, much to their surprise. She was way ahead of her times and I often marvel how she brought up five kids all by herself – all of them well educated, well-settled and each one socially responsible.

My grandfather turned out to be a smart businessman who foresaw the growth of Siliguri town and made buying and selling land, his business. He also took up petty building contracts and soon came to own a lorry and a fruit ‘arad’13 on Bidhan Road14. He also helped some of their other family members to translocate to Siliguri. I twice visited Kohima and Imphal with my grandmother in 1975 and 1978 when my eldest uncle was posted there. She met her family members and some of her childhood friends. It was such a joy watching them chatter about their glorious childhood, munching on betel nuts. We visited the Kohima War Memorial where I got to see the graves of the victims of WW II. I was also made to read and learn by-heart the epitaph which read: “When you go home, tell them of us and say,…for your tomorrow we gave our today.” Although I didn’t understand the full import of those words then, I remember being saddened by the two words ‘tomorrow’ and ‘today.’

The bonding I shared with my grandmother, I think, was secretly envied by my mother. She still regrets not getting to know her mother better. Perhaps granny was too busy bringing her other four children up and of course later my mother became very busy with her own career. So, it was I who became my grandmother’s daughter. For as long as I can remember, I had always been her confidante, her secret keeper and later, as she aged and I teenaged, the bearer of her ramblings and grumblings that would mercifully sink into the mushy quicksand of my young heart.

Almost thirty years after she has been gone, I can still recall every wrinkle on her face, every stain of her teeth, her nail-less left toe and the triangular burnt mark on her elbow. She always smelt of chandan,15the paste of which she applied as a tika[note]A small mark either round or elongated that Hindus put on the forehead as an auspicious sign[/note] everyday on her forehead and liberally rubbed the leftover on her throat. And even as I write this, there is a lump in my throat. I will always remain my grandmother’s daughter. 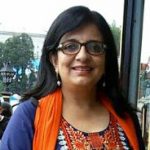 Sharda Chhetri is an educator and writer who lives in Darjeeling.

17 comments on “My Grandmother’s Daughter”