My mother, Katrina was barely 10 when she was orphaned, her mother predeceasing her father by a few months. Born in the village of Dunika in western Latvia, she had been a symbol of God’s special favour to her mother who had lost two sons in infancy. Katrina was pampered and protected by her adoring mother till one morning changed her fate. Theirs was a small but self-sustaining farming family that kept animals for food and for cultivation. One morning her mother out on her daily farm chores was thrown off the horse carriage and very badly wounded. The local doctor treated her but could not diagnose the severe damage that the fall had caused to her lungs. She took to bed very soon and passed away without being properly treated. Katrina’s father distraught with guilt and grief died not long after. Young Katrina was left alone in her farm home. Her aunt who lived in the neighbouring village of Rucava brought her home and took care of her. Katrina hated school and stopped after attending for barely three years. But she learnt all the trades of the farm and grew up to be very sharp with numbers. I recall her adroitness in calculation for I could never compete with her even after finishing University.

When Katrina turned 18, she returned home to Dunika to live in the house and run the farm which had been rented out while she had been away. Her skills were put to good use. She soon met a young man named Toms and they married. They had two lovely daughters and together raised a happy family and a comfortable household. One day, her husband was commissioned by the local court to be a witness in a criminal case under trial. The court was some miles away and Toms decided to take his family along. They had to stop for a night at an inn. While Katrina and the girls rested in the rooms upstairs, Toms went down to the pub to share a drink. He never came back. Someone had spiked their round of drinks and while one of the others tasted it and finding something wrong spitted it out, Toms swallowed his drink and died of poisoning. Katrina was left widowed with two daughters aged 4 and 2.

My mother met my father, Aleksands not long after her tragedy and remarried. The Second World War had already begun as their new life unfolded. Dunika was bombed for the first time when Katrina was heavily pregnant with me. She ran for cover holding the hands of her two girls into a temporary shed. The family was asked by the local authorities to vacate their home because there was to be a trench dug next to the cowshed. They moved to grand aunt’s house in Rucava where I was born in November of 1944. Within three months, my father was drafted into the Soviet army and sent to war. Katrina never heard from her husband again, didn’t get to know where he was killed and how and if he had had a decent burial. Deep in her heart she came to terms as did I, with the inevitable that, in all likelihood, he was denied one.

Katrina was back on her own with three little children to bring up. Dunika had been the scene of some grim battle between the retreating German soldiers and the marching Soviet army. Katrina returned to find her home destroyed by the invading Soviet forces and all her animals gone. Half the house had been burnt down. She began building her home and her farm bit by bit from scratch. But it was years before there was any semblance of normalcy in our lives. The village was besieged by Soviet forces. Latvia which had been an independent nation since 1918 was now conquered by Soviet Union and brought under its political regime. Soldiers of the Red Army marched the streets and raided homes with impunity. Each family was permitted to keep just enough to feed all the members; the rest had to be given up. Katrina was allowed one cow, one pig and a few poultry birds.

I can still recall the chill we experienced during the unannounced visits of the soldiers. They would prod and push to see if we were hiding anything that we were not supposed to have in the house. It was unmitigated terror. We had hay to cut, stack and keep for which my mother hired farm labour. One young Lithuanian came to work in the farm. There was more widespread poverty in Lithuania (if that was possible) than in Latvia which barely survived. But it was illegal in the Communist regime for people to move from one region to another without permission. The local Soviet police were possibly tipped off by neighbours about the young man working for us and they came charging one morning. They threatened to shoot at the haystack in the barn and set it on fire if the Lithuanian did not show up. Our grandaunt visiting us was present and asked them to explore the attic which they did not. I still don’t know where the young lad had hidden but he was not found and we were saved. I still get shivers down my spine, reminiscing those encounters.

My mother took care of us, three sisters, sent us to school and University, never seeking respite from hard work. She ran the farm for as long as her health permitted. Then we had to sell the property and she moved to a neighbouring town. Money was never enough and she often had to supplement her savings by working as a cleaner in offices. She had a long hard life and lived to be 90. She died in 2010.

I can never look back to think of my mother Katrina without tears in my eyes. 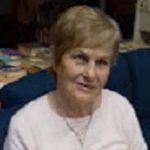 Vilma Giga divides her time between Riga and Cambourne.