I was very lucky to be loved and cared for by my grandparents for a very long span of my life.
My paternal grandfather died at the age of ninety two in 1980. My grandmother passed away three years later. She was born in 1898, ten years younger to her husband. I was very close to both of them. Both my son and daughter were fortunate to have spent their formative years with their great-grandparents.
My parents lived in the industrial town of Durgapur1, not far from Kolkata where my grandparents lived. Both my brother and I came to Kolkata for our under graduate studies, after finishing school in Durgapur between 1965 and 1968. We lived with our grandparents then and what love and care they bestowed on us! I have very fond memories of both of them.

My grandfather would walk me to the bus stand from where I would board the bus to college. Most of the days he would be waiting at the bus stop for me to return from college. We would walk back home discussing my day and my friends.

At home, my grandmother regularly cooked delicious snacks and special food for me and my friends. She would wake me up in the morning and sit in my room giving me company while I studied and prepared for my exams.
Like all married couples, my grandparents disagreed on many things.  And every time they had a fight, my grandfather blamed my grandmother. He said, “She was asleep all the time the marriage vows were taken.”
Actually the fact was they had an arranged marriage as was the custom of those days.  My grandmother was nine years old and my grandfather was nineteen. After a whole day of rituals and all the excitement, the nine year old bride, was too tired and fell asleep, in the evening, while the priest recited the mantras (scriptural verses) and the actual marriage was taking place. My grandfather could never forgive her for spoiling this special romantic moment.
The first few years after her marriage, my grandmother stayed back with her parents. After puberty she came to stay with her in-laws. My grandfather was studying law and staying in the College hostel. After finishing studies, he joined the government service as a magistrate. Later he retired as a judge.
My grandmother joined him at his place of posting and they started a family.
My grandmother had never been to school. She learnt elementary Bengali and Arithmetic at home. But after they got their first child, my grandfather was worried that bringing up children would be difficult for her unless she learnt English. Especially when someone was sick, to read the doctor’s prescription and administer the right medicines would be impossible. So he started teaching her English at home.
My grandmother was an enthusiastic learner. She picked up the language fast, and started appreciating English literature. In my childhood, she often told me how she read “The Good Earth” by Pearl S Buck. She was very fond of Bengali literature too. She had read the whole works of leading Bengali litterateurs, like Rabindranath Tagore, Sarat Chandra Chattopadhyay and Bankim Chandra Chattopadhyay2. She could recite most of all, Tagore’s poems from memory. She was a good writer too. She often wrote short poems and prose pieces in Bengali. She was a voracious reader and read all contemporary Bengali writers.
She was a good story-teller as well. All her grandchildren were extremely fond of the stories she narrated. All through my growing years I got good guidance and advice from both my grandparents. Even today I miss them very much. 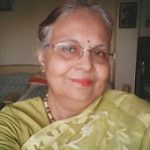 Ketaki Ray Chaudhuri is a home maker, who lives in Kolkata.