I came to live in Coochbehar with my parents- in- law after I was married. Coochbehar, 700 kilometres north of Calcutta, used to be an independent kingdom governed by a Maharaja till it merged with the Indian Republic in 1949, two years after its independence from British rule. My grandfather in law was the private secretary to Jitendra Narayan, the Maharajah of Coochbehar from 1913 to 19221. My husband’s family thus came to have close connections with royalty and was held in high esteem by the people in the town.
My father in law, a lawyer, was a very good story teller and finding in me a good listener, told me stories of the times of the Maharaja and the royal family. Members of the family, said Baba (Bengali for Dad), had invested a lot in raising the standards of education within their dominion, and were especially attentive to educating girls. I noticed that my husband’s aunts were all educated and well read.
But the story which really fascinated me was the episode of the food riot. I was strolling with my husband around Sagar Dighi (a lake in the centre of the town) when I noticed a shahid bedi (platform commemorating martyrs). I went forward to look at it closely and found five names engraved on it with their ages that ranged from 7 to 23. I asked my husband about the incident, but he was too young to remember. I went to my story telling Baba who did not disappoint me and narrated the whole episode in detail.

At the time when Coochbehar acceded to the union of India in 1949, the Maharaja was Jitendra Narayan’s son, Jagaddipendra Narayan. The kingdom was turned into a district, the town becoming its headquarters. Before 1947, the entire estate had had a surplus in food grain production, specially rice. The economic conditions fast deteriorated after the Indian independence and the partition of Bengal between India and Pakistan, the main reason being the influx of refugees from East Pakistan (now Bangladesh) particularly from the districts of Mymensingh and Rangpur. A large number of people escaped with their families, the horrors of partition, fleeing with nothing but the clothes on their backs2. In dire poverty, these men, women and children came to live in the town of Coochbehar and its outskirts.

The staple food of Bengal is rice that people have for all their meals even if they have nothing else but a little oil and salt to eat it with. The province of West Bengal of which Coochbehar was a district, was governed in 1947 by the chief political party in India, the Indian National Congress that was also in power at the centre in Delhi, the capital. Faced with a huge demand brought on by the sudden increase in population and could not be met with the supply, the government found no other option but to raise the price of rice.
In 1951, the price of rice rose from Rs. 15/16 to Rs 32 per maund (approximately about 82lbs). That created a huge dent in the pockets of the poor and middle-class families. Even the more affluent families were affected and opposed the move of the government. Ration cards were issued to people in the suburbs of Coochbehar for rice that they could buy at the subsidised rate of Rs 16 per maund but those in the town without the facility, had to buy at the much higher rate. Prices, meanwhile continued to rise as high as Rs 60 per maund. People in the town became desperate and could only talk about rice and the high price.

Heated discussions led to widespread protests at the initiative of left leaning parties like the Socialist Party and the Forward Bloc3 that opposed the centrist Congress government. Under the leadership of a local leader, Chunilal Mukherjee, 200-250 people organised hunger strikes at important public points of the town. But the local administration remained unmoved. Agitators then planned on marching to the district collector’s office and submitting a memorandum, demanding rationing system in the town along with provisions for food,clothing and education for all. The memorandum was submitted on the 19th of April 1951 in a peaceful march.

The next day, on the 20th April, the protesters decided to march again from various pockets of the town to the district collector’s office. They were not allowed to enter the office and were obstructed by the district police chief. On 21st April, another protest march was organised and people from all walks of life including school and college students participated. But tragedy struck that day.
As soon as the demonstrators reached the district collector’s office, the police suddenly opened fire that killed five innocent people and injured many more. People scattered and dashed helter skelter; the seriously injured were taken to the hospital. Five of them whose names were engraved on the Shahid Bedi had succumbed to their injuries even before the ambulance could reach them. They were: Kabita Basu (18 years) Bandana Talukdar (13 years) Bakul Talukdar(7 years)Badal Biswas(22 years) and Satish Debnath(23 years).
Why did the leaders of the parties that initiated the protests not lead the march? Why were the children and young adults in front? How could the police be so insensitive and open fire on them? Baba could not give me answers to these questions. He told me then if you study the freedom movement of our country you will realise that many more young adults were killed in action than the leaders.
The chief minister of West Bengal, Dr. Bidhan Chandra Roy, immediately transferred the district collector. All the leading newspapers condemned the incident and the government sent officials to address the issue and sort the crisis out.
When I got married Coochbehar was a peaceful place, with warm and helpful people. Every year, the 21st of April is marked as the day of mourning when people remember and pay their respects to the memory of the five innocent victims of the food movement. All educational institutions remain close and the day is called the Shahid Diwas ( Martyrs’ Day).
The sahid bedi stands in the heart of the town evoking in me remorse and sorrow even as I pass by it so many years later. How could the deaths of these innocent young people ever be justified? The question will never have an answer.
Urmi Ray lives in Kolkata
Author profile 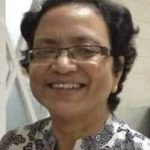 Retired Headmistress and an Educator, Urmi lives in Kolkata.

3 comments on “Freedom, Food and the Tragedy of Deaths”