In 1955 I was offered a two-year scholarship to Harvard University, to get my MA in English Literature. It was the first time in my life that I was travelling on an aeroplane. I was not afraid, but rather anxious to see the end of the journey in America, of which there was so much talk in my younger days, some admiring, and some rather apprehensive of what living in that country was like. I knew I was going to a university which is the aim of many young people who have wealthy families. My scholarship was provided for by the Ministry of Education of my country, so I was not worried about that.

The journey made three stops on the way and every stop was about one hour of rest; I ran, as almost everybody did to the shops of the airport to buy souvenirs and postcards to send home, to tell my people about all the strange things I met on that journey, and to choose gifts to send back to the younger members of my family. I was under the impression that what I was planning was a duty towards those dear ones who will have no chance to take an aeroplane to a foreign country, America in this case.

When we arrived at the Boston airport, I thought of taking a taxi to the address I was given in Cambridge, Massachusetts, the site of the very first university established on the American soil in 1636. The founder was John Harvard, one of the Puritan immigrants, who left with about 70 others to the land of new opportunities. John Harvard himself was an academic from Emmanuel College, Cambridge UK. The University started as Harvard College, accepting boys only. But it developed a great deal in the following years and decades, until about 100 years ago, Harvard University started accepting female students. Yet you always spoke of a Harvard man, but nobody speaks of a Harvard woman, though the classes had been mixed – of male and female students – for a long time before I arrived in 1955.

At the airport, I was pleasantly surprised to see a man welcoming me and taking me to his car, and I never stopped wondering how he recognised me and knew that I am the “foreign student” coming to Harvard and in need of some guidance. The man was very kind and was not annoyed at my numerous questions about the organisation which he represented to welcome students coming from overseas. I was really astonished to see the continuous line of trees on both sides of the road between Boston and Cambridge. What was equally surprising to me was the different colours of the leaves on the same tree: red, yellow, violet, and a mixture of those colours, in the same leaf in the tree. I naïvely asked: Where is the chlorophyll? My guide said: But there is also other “phylls” you have probably not heard of. We call that “the Indian Summer!’’ Then I realised that he meant Red Indian summer.
At the club of the foreign students I was given a room to share with a Scottish young man, who kept snoring all night long, thus depriving me of the much wanted sleep after the long journey. The following morning, I went to meet my adviser, at 10 am. I was dressed in what looked unusually elegant, as most of the students were casually dressed. I stopped at the door of my mentor’s office, politely asking the secretaries who looked at me, kind of surprise, as if I was from another world. I introduced myself and said I am expected at 10 o’clock. Can I see my professor? One of them answered me in a nasal sound, saying “go right ahead!” I went in and stopped to knock at the door of my mentor, which was open and, obviously in no need for knocking  to ask for permission. I heard one of the four secretaries saying, “Who is that Oxford cat?” I think the young lady found my Oxford English rather strange to her ears. But up to this day, I do not know what she meant by “Oxford cat.” The elderly professor was dressed casually, and made me very welcome by asking me about my trip and my health. He said that I needed to take good rest before we started talking about my study programme the following day.
I had my first lunch in the US at a restaurant near Harvard Square,

which was full of students, so I realised it must be not an expensive one. I looked carefully at the dishes that were displayed behind the counter, trying to read the names of those dishes, trying to avoid what was pork or any kind of meal which I have not heard of. It seemed to me that the entire staff in that restaurant were Italians. I had a touch of cold, from that long journey, and the man behind the counter seemed to have noticed that. So before even asking me what I wanted to order he asked me with a nice Italian accent, “How are you this morning?” I answered, “I am much better this morning, thank you!” I was asking myself how did that Italian know that I had a cold the night before, and that this morning I felt better. Then I realised, when it was explained to me, that this was one of the ways of saying: Good Morning! How are you?

The time was late October, a little chilly for someone coming from Baghdad and its hot weather, even in autumn. I soon made many friends at the University, probably my Oxford cat accent was attractive to them, as most of them started asking me many curious questions, about my homeland, our food, our family life, and whether I have any shares in the oil industry, coming from Iraq, a country that swims on a sea of oil. I found strange and unusual practically everything I came across.
The University tried to keep a British tradition of respecting the afternoon tea time. At 4 pm, every day the graduate students filed into “the tea room” where two elderly ladies would be royally seated behind an elegant table displaying two shining silver samovars with dozens of teacups and silver teaspoons. The ladies received each student with a big smile, asking him all kinds of personal questions, which gave the impression that they were regarded like family members.
The teatime was a great occasion to make friends. Considering me a Muslim Arab, hence ignorant of Christianity, one of the ladies asked me whether I have seen any of the representations of the birth of Christ in the manger, displayed in the main public park in Cambridge. Then, the lady started describing to me the story of Christmas, and as I interrupted her story, by throwing in some information, she was surprised, coming from a non-Christian. When I explained to her that Christianity came from our Arab homeland, the heart of which is Palestine, she was embarrassed, and said: Oh really, that is true, that, of course is true!

To try and alleviate her embarrassment, I promised to go and see that representation, and come the following day and tell her my impressions. When I went to see the beautiful representation of the manger and the holy family, I was stunned to see that the group of lambs on the scene had pointed heads and long tails instead of the round cushion of fat at the bottom end of the lamb, which was normal in the Middle East. The following day, at teatime, the lady was all ears to listen to my impressions of the Christmas representation. The first thing I said to my lady friends: “But why do they have a group of wolves instead of lambs at the manger?” The lady did not know what I meant, but when I explained to her that the lambs should have a round cushion and not a tail, her only comment was: Oh, really?

One of my classmates was an Indian student from Delhi. He was full of jokes and mischievous plans. But he looked very serious, and one could not help believing what he said, as his face betrayed no mischief at all. One day, the two of us were waiting for the elevator to come down to the ground floor, so we could go up rather than use the stairs. A young student joined us waiting for the elevator. Unexpectedly, she asked the Indian student whether they have elevators in India, and whether they have electricity to work them up and down safely. The naughty fellow answered quite seriously, ‘Unfortunately we do not have electricity in India, but we do have some elevators in some important government buildings. Because we have no electricity to work the elevator up and down we use strong monkeys to work the elevators, much better than your electricity. The expected answer from that ‘Harvard woman’ was: Oh, really!
Those were the good old days!
Dr. Abdulwahid Lu’lu’a, a scholar and writer lives in Caldecote, Cambridge
Author profile 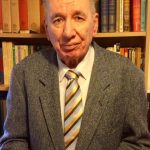 Dr. Abdul Wahid Lulua is an author who lives in Caldecote.