Scientific research has shown that people who are attracted to one another, experience a phenomenon in which a gene inside them is ‘switched on’ at the time of their first encounter. My love story and Rinku’s seems to prove this theory right; we were unaware when we first met, that a gene in us had been switched on and despite not consciously realising it, we grew inexorably attracted to one another over the next few years!

Rinku and I met while in school in Mumbai, by a twist of fate. I was a nerdy but popular boy in school and a favourite with all teachers except one who, during a class in Year IX, decided to physically hit me for talking to another pupil. This led to two ramifications: the teacher being severely reprimanded for his actions was eventually dismissed and I was moved to another division where I was to meet my future wife!

My initial impression of Rinku was of a quiet, confident girl who did not talk a lot. However, I found her extremely beautiful even though she wore glasses; she had cute dimples, luxurious hair and attractive lips! My gene had perhaps been switched on! Very soon I realised that several boys were interested in getting to know her, but she wouldn’t pay attention to any of them. However, while she remained indifferent to advances from other boys (I remember thinking of her as an Ice Maiden) she seemed   responsive to me and never ignored anything I said – perhaps her gene had been switched on too!

I did take note of this and tried taking advantage of it by using every opportunity to speak to her, which of course, made the other boys jealous and me, very chuffed. As a popular in school – I got catapulted to prominence (I became the head boy, the school cricket captain and was chosen as the lead speaker in the school debate). I then tried to play ‘hard to get’ with Rinku but did not enjoy this for long and instead dropped hints to her in jest, like in games of ‘fish pond’ where one could anonymously praise another person. My gene had definitely been switched on. I did not make any further advances towards Rinku while in school though she remained in my mind after we graduated and left school.

Despite choosing separate paths after school (Rinku pursued Commerce and I, Science) we met again and again over the next two years. Sometimes it was at common friends’ birthday parties, sometimes it was a chance meeting in the area (we lived 2 miles apart only). Was it fate? I don’t know, but I am sure glad that it was like this. As I went through college meeting interesting girls, the one thing that constantly kept happening was that I found myself comparing them to Rinku! I realised that Rinku was different from these girls in several ways and that she always gave me her attention without demanding any. When I finally asked her out, she didn’t play hard to get and readily agreed.

By the time I entered medical school, Rinku and I met quite regularly and shared our experiences. We gradually came closer and closer.  Rinku had little inhibitions and was quite happy to steal a kiss. I guess in the 1990’s India, we were ahead of our times. Her natural reaction to my overtures left me completely besotted.

Around the end of my first year in medicine, I decided to pop the question ‘will you be my girlfriend?’ However, in retrospective, I proposed in the most unromantic fashion; it lacked style as I did not get down on my knees nor did I offer her flowers. I merely asked her, and she said yes! I guess if her gene hadn’t been turned on, it would have been the most undramatic proposal and she would have turned me down! I like to think that she was a follower the famous ghazal singer Jagjit Singh’s[1] ethos – Kaun kehta hai mohabbat ki zubaan hoti hai; ye hakeekat to nigaaho se bayaan hoti hai!! (Who says love has a language, the state  is expressed through the expression of the eyes­).

Rinku and I courted for the next 6 years before we got married. These were the most turbulent years of our lives, but she remained steadfast as my support, my companion and the joy of my life. I still owe her a decent proposal after leaving India together, having two beautiful and amazing children, achieving fantastic professional success and spending nearly 20 years together. Ahem, so here goes (pretend I am on my knees now!)   To my best friend, my steadfast companion and my sexy wife – will you spend the rest of your life with me ? 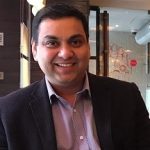 Gautam is a Doctor who lives in Cambourne, UK

4 comments on “The Love Gene”