My father-in-law belonged to the village Bhowanipur in the Jagannathpur district of Sylhet, a province now in Bangladesh. His forefathers traced their descent from a certain Bejoy Singha, who  had been conferred the title of Raja by the Nawab of Bengal in Murshidabad1 along with a charter showing the lands conferred on him as well as a copper plate engraved with the words “Raja Bejoy Singha.”

Woopendra Chowdhary’s great grandfather Kulachandra, grandfather Krishnagobinda and father Dinanath all lived in Bhowanipur drawing upon their landed property for sustenance. Dinanath a Sanskrit scholar of some repute composed devotional songs and set them to music.  He was held in great regard by everyone and his wife Kamala Devi too was deeply religious and kind hearted, besides being a person of great beauty.

Of Dinanath’s four sons, the second Nagendra and third Woopendra were always close. After graduation, Nagendra took up a job in a school in Sylhet where he came under the notice of Raja Girish, the local landlord. The latter was so impressed by the young man’s bearing, integrity and erudition that he arranged a marriage between Nagendranath and Raitarangini, the youngest daughter of Binodini Devi, the owner of an adjoining estate called Khazanch Bari. The marriage proved to be a great success. When Binodini’s only son and a son-in-law having died young, Nagendranath became his mother-in-law’s right hand person in all matters of property which incidentally grew manifold due to their farsightedness and able management.

Woopendra, born on the 17th of November 1886 grew up to be a brilliant student. He first studied in the village “Pathshala”2 and then in a school in Sylhet town, from where he passed the Secondary examination with flying colours. Observing his younger brother’s keen aptitude for science, Nagendranath sent Woopendra to Calcutta to take up Intermediate Studies in science at Ripon ( now Surendranath) College, one of the premier institutions of the time. Woopendra also showed a keen interest in languages and history. Later Nagendranath decided to send his younger brother to Germany for higher studies- quite a progressive step for an orthodox Hindu Brahmin family from remote Sylhet! Fortunately, Woopendra was granted a scholarship by the Indian Association for the Cultivation of Science which took care of the financial angle.

In Germany Woopendra not only obtained a Ph.D. degree in Mining and Mineralogy from the Berlin University but also a degree in Mining Engineering from the Technical Institut of Goethe Anhalt. After spending over six years in Germany, Woopendra returned to India and worked as a Consultant Geologist in the Chottanagpur plateau of Bihar (now Jharkhand), Orissa, the then Madras Presidency and the Central Provinces in India. He also spent a considerable time exploring in the Shan States of Burma(now Myanmar), Thailand and the Burma China Border. In 1928 he was appointed the Senior State Geologist of the Princely State of Jaipur. After spending about fourteen years there Woopendra moved to the Princely State of Bikaner further west, for about four years and then to Jamnagar in Saurashtra, now in Gujarat.  He retired from active field work about 1949 and settled in Ranchi for good.Woopendra married Asoka Devi on the 27th of February 1913. The only daughter of Justice Sir Ashutosh and Lady Protiva Chaudhuri, she was born on 22nd.October 1895.

Born on the 12th of June 1860, Ashutosh was the eldest son of Durgadas Chaudhuri of Haripur, Pabna in Bangladesh. Their original surname was Maitra and Durgadas’ ancestor, Hari Maitra settled in a village which later became known as Haripur either after him or in all likelihood renamed by him probably due to  his faith in Vaishnavism3.  It was Hari Maitra’s son Jadavananda who was conferred the title “Chaturdhurin”, which later became Chaudhuri, by the Raja of Santyl whose collector of revenue, he was.

Jadavananda’s grandson Ramdev not only succeeded to the title and offices of his grandfather but also attained the position of “Dewan” the Minister of Finance in the Santyl Raj.  Durgadas, my mother in law’s grandfather was a direct descendant of Ramdev. He was also closely related to the Royal family of Natore. His father Kalikanta married Kumari Devi who was the elder sister of the Maharani Dayamoyee Devi. A benevolent landlord himself, Kalikanta passed away in his late thirties when Durgadas barely eleven months old.  The family suffered severe reversals of fortune thereafter and Kumari Devi also passed away when Durgadas was twelve years old.

Durgadas proved himself to be good in studies and with the support of his elder sister Mrinmoyee Devi, he completed his studies from Hindu College in Calcutta and was inducted into the Bengal Civil Service as a Deputy Magistrate. His wife Magnamoyee Devi belonged to the well-known Roy family of Bag near Chatak in Bangladesh.

His son, Ashutosh too was academically very accomplished, appearing for the B.A. and M.A. examinations of the Calcutta University in the same year. As far as it has been possible to ascertain, he was the only one to do so. He next proceeded to England in 1881 and joined St. John’s College in Cambridge. He obtained the degrees of B.A. and Ll. B.(Cantab) from there. While a student he composed a poem on the Italian preacher Savonarola which was highly appreciated. On returning to India he joined the High Court at Calcutta proving to be one of the most successful barristers of his time. He was later appointed a Judge of the same court, the first Bengali barrister to be so chosen. An active member of the Indian National Congress, it was he who coined the phrase, “A subject race has no politics!”. He was one of the founder members of the National Education Council that started the  Jadavpur Technical Institute which later became the Jadavpur Engineering College in Calcutta. It was he who laid the foundation stone of the Jadavpur College that subsequently  blossomed into the Jadavpur University.

Ashutosh Chaudhuri married Protiva, the eldest daughter of Hemendra Nath Tagore who was the third son of Maharshi Devendra Nath Tagore and an elder brother of the poet Rabindranath Tagore. The Tagores of Jorashanko4 need no introduction. Protiva Devi was extremely well versed in both Oriental and Western classical music- both vocal and instrumental. When the dance drama on Valmiki’s life written by Rabindranath was enacted for the first time in Jorashanko, mainly by family members, young Protiva ‘s rendering of the parts of “Banadevi”(Goddess of Forest) and “Saraswati” (Goddess of Learning) were superb and made Rabindranath name the play “Valmiki Protiva!”5 Later with the support of her husband Protiva Devi not only held musical evenings, soirees and dance dramas at their residence but on the day of Rakhi Purmima6 in the year 1911 started the musical school  “Sangeet Sangha”, thus opening the portals of classical music , both vocal and instrumental, to girls from respectable families. She not only took classes herself but also persuaded her daughter Asoka to do so.

Pramathanath the fourth brother though a barrister was better known as an eminent writer married Indira Devi, the daughter of Satyendra Nath Tagore and Gyanadanandini Devi. Satyendra Nath was the first Indian to be selected to the Indian Civil Service(I.C.S.) while Gyanadanandini  the creator of the modern style of draping the sari that Indian women continue to follow. Manmathanath the fifth brother, a doctor, married Leela Devi, the grand daughter of Saudamini who was Maharshi Devendra Nath’s eldest daughter. Incidentally Manmathanath and Leele Devi ‘s daughter was Devika Rani, a well known actor of the Indian screen in the 1940s.  Surhitnath the sixth brother married Nalini the daughter of  Dwipendra Nath and grand daughter of Dwijendra Nath who was the eldest son of Maharshi Devendra Nath .

Asoka Devi was well versed in vocal and instrumental music, especially Western and was a superb pianist. She not only sang patriotic songs along with her maternal aunts in the session of the Indian National Congress held in Calcutta in 1905 but also following her mother’s footsteps, enacted the part of Saraswati  in a performance of the dance drama “Valmiki Protiva”  held by her parents in1912 at their residence 6 Sunny Park.

Asoka Devi was a great favourite of both Satyendra Nath and Jyotirindra Nath Tagore while Woopendra also held them in great regard and hence the decision to build Sreenibas next to Satyadham, the house that Satyen Tagore and Gyanadanandini built in Ranchi.

This account of the ancestors of my husband’s parents, I have been able to put together by speaking to surviving members of the large and illustrious family and a few documents that still exist. The family represented a unique blend of cultures that I feel needs celebrating and their memories worth preserving for posterity. 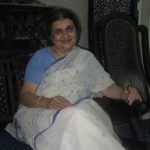 Smita Chowdhry retired as a Reader of Chemistry in a College in Kolkata where she lives now.