My earliest memory of Dashami (the last day of the Durga Puja festivities) is sitting on the terrace under the bright sun, with an umbrella propped up over our heads, Didi (older sister) and I reading books. Correction: we would actually be guarding the Bori (a dry dumpling usually made from lentil or dal flour) that Maa would painstakingly lay out to dry. The Bori would come in different shapes, sizes and colours, depending on the kind of flour that has been used – masoor dal, moong dal, biuli/ urad dal, rice flour, matar dal or a combination of all.

The lentils would be soaked overnight and in the morning they would turn into a paste in the blender. Didi and I had to quickly scribble names of Ma Durga (Goddess Durga) and her four children in Bengali script – perhaps one of the few times when I would practise writing in Bengali – as part of the Dashami ritual, and pick up our books to begin our guarding duty next to the Bori. You see, at least one set of these Boris had to dry by late morning, so Maa could prepare a Machher Jhol (fish curry) with them for dinner. Hence, the preparation had to start as early in the morning as possible.

Festivals, to me, have always been about rituals and food, the latter being an intrinsic part of my growing up years. This was perhaps because Maa was considered a chef within the extended network of families, friends and relatives. She was one of the reasons why we didn’t grow up dining out at restaurants. If we wanted to have any delicacy from any part of the world, Maa would fish out a recipe for it and try to create the flavours with whatever was available at home or in the local markets. We grew up with cuisines from all over the world, but almost always with an Indian tinge to it.

Maa’s most famous preparation perhaps was what my Thamma (paternal grandma) would refer to as Tinopal Sandesh. Tinopal was a well-known fabric whitener in the 60s and 70s in India and Thamma readily identified Maa’s stark white moulded coconut sweets (Narkel-er Sandesh) with this whitener brand. No one I know of can make it as white as Maa could; I can vouch for it to this day. The recipe, although I know in theory, continues to remain a secret.

The Dashami celebrations were seldom complete without the Tinopal Sandesh, along with Nimki (savoury fried-biscuit), Elo-jhelo (sweet fried-biscuit) and Kabuli Chholar Ghughni (chickpea curry). This was consumed with friends and family in the early evening, followed by the fish curry with Bori at night. It was much later that I realised the significance of the comforting fish curry and rice dinner, in spite of an evening of rich snacks. We were not allowed to go to bed without a mouthful of this comforting food, as it was considered to settle the stomach.

Likewise, the Lakshmi Pujo festivities were another series of mouth watering delicacies. From Teel-er Naaru (sesame and jaggery balls) to Narkel-er Naaru (sweet coconut balls) to the split moong beans and coconut salad, we couldn’t have enough of them. The Saraswati Pujo1 festivities, on the other hand, were about delicious Khichuri – a vegetarian risotto made with split moong beans, rice, cauliflower and other spring-time vegetables. The aroma of warm Ghee (clarified butter) on the colourful array of vegetables – cauliflower, green peas, tomato, ginger – atop a bright yellow base of rice and beans, comforted the soul as well as the palate.

What was perhaps the highlight of the year, was the festival of colours (Holi or Dol, as Bengalis refer it to), when Didi and I would be allowed to have a few sips of the Bhaang (a milk-based drink with marijuana paste and rose water) at the community celebrations. Lunch would invariably comprise Enchor-er Torkari with Daal-er Bora (jackfruit curry with lentil fritters) and steamed rice. In the evening, Maa would be found in the kitchen frying Malpua (pancakes with coconut, dipped in sugar syrup), which we would devour even before they cooled down to room temperature.

These stories are endless. But my biggest regret is that we don’t have these gastronomic rituals documented anywhere, except for the two handwritten diaries of recipes that Maa has left behind. Baba never allowed her to hire a cook at home, as he was spoiled by her cooking. In spite of being an atheist, Baba never stopped her from rustling up the festive feasts. The only thing he had a problem with were her extended fasting rituals on Shiv Ratri and Lakshmi Puja 2.

On Maa’s 22nd death anniversary, I have finally found an opportunity to reconnect with the culinary journey of my childhood via this article. All that I have managed to achieve in the past few years is a compilation of QuikFix Recipes, in the format of a mobile application, that literally helped me survive in a foreign country with no one to cook for me. The application gave way to a blog, which is in the process of being converted into an e-book on Amazon. However lofty this might sound, Maa would have surely cringed at the shortcuts to her recipes that I have discovered since. 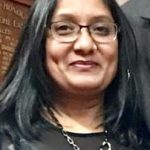 From Kolkata to Leeds, Mumbai to London, Pune to currently in Auckland, Dr Paula Ray has dabbled with writing – both academic and journalistic. She considers herself a zingare (Italian for a ‘gypsy woman’), with a global palate for creativity.

13 comments on “Of festive feastings, not fastings”