We as a family of four have been living in Adelaide for the last six months where we relocated from Cambourne in Cambridge. It had been our home for the past 10 years. We are Polish, born in the Silesia region1.

I would like to share a story that my grandmother told me on many occasions. However, when I started writing this story down, I realized that there were so many facts missing and I wished she was still with us so that I could ask her more.

My grandmother was born in 1925 in a small village in the south west of Poland, the seventh child of the family.

When World War II broke in 1939, she started to work as a maid for a very wealthy German family living in the area. At that time, the village was on the Polish-German border and most of the mines were owned and run by German engineers. She never mentioned how she was treated by them or if she liked them or not. That is something I wish I could ask her now…

In January 1945, following the victory of the allies, when the Russian army started taking over cities in the Silesia region and forcing the Germans to retreat from their positions, the German families had to leave their homes and workplaces and relocate to Germany. That was the reason why the family my grandmother was working for, decided to flee and resettle in a small town in the north-west of Germany.

My grandmother agreed to join them and in 1945, she took a train with the others to continue to work as a maid for that family but this time in their country.

After a short time, she had to leave their home as she was no longer needed. I believe that the family simply could not afford her living with them even though they were not paying her any money.

My grandmother stayed and worked as a maid in the house of a local priest. In 1947, she received her first letter from her mother sent through the Red Cross. The letter said that my grandmother was greatly missed back home. Her mother asked to come back with the help of the Red Cross.

For her way back, she was given some money by the priest. Unfortunately at the border, she had no choice but to give the money away to the soldiers who searched her. She returned to her family absolutely empty handed. Her return was quite a surprise to everybody and she quickly realised that there was no place for her in the house, as during her absence, one of her sisters had got married and had a baby; so the new family took my grandmother’s space including her bed.

To make her a place to sleep, her mum filled one of the sacks used for grain with straw and covered it with a piece of cloth. My grandmother remembered it as the most uncomfortable bed she had ever slept on. The situation did not get any easier. The family experienced poverty caused by lack of work.

Finally she found work in the local brickyard and was able to help her family.

As I mentioned at the beginning, my grandmother often recollected her time of living in Germany. Even when nearly ninety, she remembered some German words and expressions. She often recalled how good her life was with the German priest and the other German maid who worked with her. How comfortable her bed was, with pure white bed linen. How well she ate! I am sure that with time she idealised her stay in Germany but what was obvious was that she clearly regretted coming back home and bore a grudge that her family when writing the letter did not let her know about their situation and the situation in their village.

She believed that her life would have been much better had she stayed on in Germany.

I always found this story interesting as it was in such a contrast to what we know about the situation of many other Poles taken to Germany to work during the Second World War.

She was not forced to go – that was her choice. I am not sure she realised that she was very lucky to work and live at that parish. It also shows that there were places where Poles were treated well.

She repeatedly told us that her life become much more difficult and she suffered a lot after the war was over, not while it was on.

Unfortunately her brother was forced to fight for the Wehrmacht (German army) and was lost during the war. This situation put her family in great danger as the Russians, who officially freed the area from being under German occupation, started executing local men who had been soldiers in the German army even though they were aware that Poles living on the border had been forced to serve Germany2. 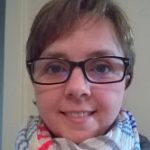 Lucyna Jachacy is an educator who lives in Adelaide with her husband and two boys.