She was born in Calcutta Medical College on November 15 1933, past midnight, the sixth child of Hemlata Basu. Her birth went through an unusual turn of events though things fell into place at the end.

The story of her birth is also that of an intelligent and strong mother whose determination made possible the normal birth of her daughter. Who knows what may have happened otherwise? A disabled child or perhaps something even worse.

Hemlata was already an experienced mother of an older daughter and four sons (though only two reached adulthood). At the hospital, when Hemlata started experiencing labour pains, she asked the attending nurse to take her quickly to the labour room. The Anglo-Indian nurse ignored Hemlata’s plea, telling her instead that it was her job to handle labour patients, one that she did appropriately. But the baby started coming out, and seeing this, the nurse panicked and hurriedly took the mother on a trolley to the labour room upstairs by lift. The situation turned worse with the approaching head of the baby that made the nurse panic further; she started pressing the mother’s knees together to push the baby back. It was a criminal act; she just wouldn’t let the baby come out before they reached the labour room! Though in severe pain, the would-be mother determinedly fought back to keep her knees apart to prevent the baby from suffocating.

Many years later, the husband of the girl born amid a virtual tug-of-war on a hospital trolley composed this limerick:

Born in a trolley–

Though through nurse’s folly,

I heard the above incident directly from the source, my grandmother, Hemlata Basu. Yes, I am talking about my mother, Ira, who later became Mrs Ira Dutta after her marriage to my father in 1954.

Ma was the youngest and last of the four living children of Charuchandra and Hemlata (two sons died young). Ira was much younger than her three older siblings, the eldest sister and two brothers.

Let us move over to an amusing anecdote (also heard from my grandmother).

When her elder sister (who I called Boromashima) was getting married at the age of 18, Ira was only a three year old kid. The days of preparations ahead of the marriage had created a festive atmosphere in the house and like the other children, Ira was also very excited. She kept running to her mother begging her to let her marry too!

The festivities finally ended when the groom left the bridal home with his newly married wife, almost everyone present around them weeping. Ira turned very quiet. After all the guests had gone, she came rushing to her weeping mother with the request never to let her marry!

Surprisingly, my mother made the same request to her parents again when she was about 18. She was contemplating a career in teaching small children and planned to join a teacher’s training course after her graduation. She was studying for a degree in Philosophy at the undergraduate institution nearby, Ashutosh College. As expected, my grandparents paid no heed and got her married in due course. (A very good decision indeed for me and my brother- we wouldn’t be here otherwise!)

Now, why did she make such a request at a time when most of the girls from her background dreamt of marriage, a suitable husband and settling down in life? Was it really because of her desire to be a teacher?

The answer lies in the unfortunate incident of her contracting rheumatism at the tender age of eight. Ira was an intelligent and cheerful girl from her early years, indulging in all the activities wont of her age. The first attack of rheumatic fever, however, forced her to lead a completely sedentary life under constant medical supervision. She paid a high price for this illness and could not go to school until she was 14 when her father retired and returned to Kolkata. My grandfather was a sub-judge and had to travel to different towns and cities of East Bengal (presently Bangladesh).

Ira also had to move with her parents, studying at home under various tutors and leading a dull life, not being allowed to play with other children. But she never let her sickness affect her learning. More importantly, she started drawing pictures and writing stories. She developed both these skills later in her life.

In Kolkata,  Ira finally got admitted to Beltala High school just to write her matriculation exam and passed with a first division with letter marks (above 80) in Mathematics! In those days, just a pass in matriculation was regarded enough for girls. She did not pursue Mathematics, got married, had two children and eventually settled down in life.

After matriculation, my mother first was admitted to South Calcutta Girls ‘College on Lansdowne Road and later moved to Ashutosh College (morning section). My grandfather’s house on Basanta Basu Road (Bhowanipur –Hazra area) was a stone’s throw distance from the college.

As mentioned earlier, she started writing from her childhood days and built up quite a portfolio of poems and stories and even a novelette. Ma along with two of her cousin sisters, Gita (Sarkar) and Manju (Mitra), used to publish a hand-written magazine, “Lekhani.” She regularly wrote for this magazine and also for her college magazine.

After marriage, she could hardly devote time to writing. But she wrote limericks and dedicated poems on the occasion of her nieces’ and nephews’ weddings. I remember my father made her write at least two beautiful poems for the Durga Puja souvenir of the multi storied building, Ananda, her place of stay for the last twenty seven years of her life.

Though my mother’s writing became irregular and almost stopped, she continued her drawing. Besides beautiful wall hangings, she did a lot of alpona (rangoli) and wedding pithikas (decorated low and flat wooden seats for the bride and groom). Moreover, she was very skilled at embroidery and traditional Bengali bridal make-up with chandan or sandalwood paste. 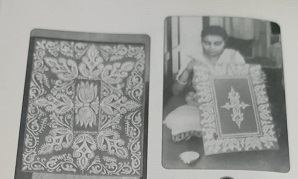 rheumatism which was never fully cured. Severe osteoporosis later in life was quite intense and made her suffer considerably. Her illness was a source of concern and anxiety for my father, who constantly monitored her condition. The end came finally on August 4, 2006. She was 73 not old enough to pass. Today, I and my brother, twelve years my junior, have only her memories to live with. 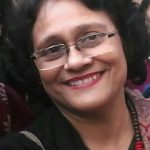 Mouli Basu is a scriptwriter and a voice artist. She is the founder of Shaalpiyal that trains actors and organises plays and play readings. She lives in Kolkata.