When I joined Bird & Co. in 1960, there were 8 jute mills under its control. One of the mills, called Lawrence Jute Mill, stood on the banks of river Hooghly near Chengail in the district of Howrah. It had to be closed due to shortage of labour as the local, predominantly Bengali workers, preferred working in their paddy fields to the hard grind of a jute mill.

There had been twenty four large warehouses inside the mill premises leased out to the Food Corporation of India for storing rice and wheat after the closure of the Jute mill in  1963.

After the closure, an officer was posted in the mill to ensure that thieves did not enter the compound and steal expensive machineries left behind. He was ably assisted by a retinue of retired Gurkha soldiers from the erstwhile British Army. After all, the age of retirement  from the Gurkha Regiment was thirty eight years.

After a few days, the Gurkhas started turning down night duty and complained that they could hear noises coming from inside the mill, as if people were working and running the machineries. They surmised that the mill was haunted and that ghosts were operating the mill.

The officer on duty at the mill immediately left without informing anybody and claiming his dues.

The higher ups in the Jute Mills Department of Bird &Co Ltd, all brave men of Scottish descent, decided against checking out the nocturnal presence of ghosts themselves, instead requested (pleaded, really) the senior Security Officer, Mr. Amal Bose, a local Bengali, to personally visit the mill at night and apprehend the ghosts, so to speak.

Amal Bose had once been the goalkeeper of East Bengal, the famed football club of Calcutta and so was a popular figure in the  fraternity especially amongst the  Bengalis from erstwhile East Bengal and present Bangladesh that the club represented. He was a great lover of food and his favourite was ILLISHMAACH BHAAJA, or fried Hilsa fish, a local delicacy. He was, as the Scots guffawed, ‘A JOLLY GOOD FELLOW.’

When Amal told me about the impending doom he was about to face, I advised him to stay in one of the luxurious flats facing the Hooghly river. Since the management agreed to provide him with all facilities he asked for, he agreed. During his first round of inspection around the factory premises at night he heard sounds of looms running inside the weaving department. On peering through the slits in the windows, he could make out in the dark some looms running, then stopping for shuttle change and then running again. This phenomenon started after sunset and continued till dawn of the next morning.

Lured by the abundance of high quality Hilsa fish, Amal stayed on in the mill for almost a month. During that period he checked with the local wise men of the neighbourhood and found out that a weaver had worked on the same loom throughout his working life. After his death, it was believed that his soul returned and resumed working in the same loom which otherwise lay idle since the mill shut down.

The above phenomenon only happened in the weaving section of the mill. This interpretation of the noise and incident was widely accepted by all concerned.

As for Amal Bose, he became a hero in the corridors of Bird &. Co, gained 4kgs in weight and suffered from high cholesterol thanks to too much of rich food, especially fried fish. Subsequently the Mill was sold to a Company who were in the business of making Jute and Manilla ropes as well as jute carpets. Manilla ropes are used for hanging convicts in jail. Sometime in 1988, I was asked by a Bank to visit the mill as an independent observer to assess the machinery lying in the Mill premises since they were mortgaged to the Bank by the new Company to raise their working capital. I went with the Bank officials and found most of the expensive machinery missing. The young Chief Executive of the Company treated all of us, Bengalis, to a sumptuous lunch consisting of Illish Maach and Kosha Mangsho (goat meat in rich gravy). During the course of lunch, I brought up the subject of nocturnal ghostly affairs of the past. He stared blankly at me and replied, ‘They are all dead.’

At the time of Indian independence and partition in 1947,  our home town and district, Sylhet was given to Pakistan on the advice, we were made to believe,  of  Gopinath Bordolai, an influential leader of the Congress party in Assam. It was rumoured that he disliked the people of Sylhet as they held most of the important posts in the Assam Government but it was a blessing for us and other Sylheti senior officials in the Assam Government who decided to 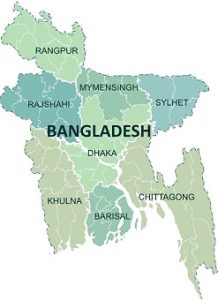 However, by August 1947, we left to settle down in Dhaka1. The Government of East Pakistan requisitioned a huge house at the above address for Baba, my father, as he was a member of the Steering Committee which oversaw the rehabilitation of evacuee properties. He later became the Chief Engineer of Public Works Department.  On retirement, he was made a Member of East Pakistan Public Service Commission for a period of five years.   In deference to his seniority, the Government of East Pakistan allowed Baba to stay in the same palatial mansion.

The building was known as “Begumer Bagan Bari,” or the country house of the Begum. It so happened that the Nawab of Dhaka had built this mansion for his Begum and had planted fruit trees and flowering plants of all varieties. It was beautifully planned home, with one part, a large suite, especially built for the Begum’s complete privacy. It consisted of a separate entrance on the first floor, having a huge drawing-cum-dining room, and a large bedroom with two beds. One side of this room lead to a large open balcony and the other side lead to two other rooms, a bathroom with a fancy toilet.

Once, and so the story went, during Begum ‘s absence the Nawab let one of his concubines use the Begum ‘s wing. The Begum was informed of this by some member of her entourage and she ordered that the next lot of unwanted guests should be poisoned to death. However, soon after this the Begum died under mysterious circumstances.

When we first came to Dhaka, Baba bought two Alsatians and named them Bagha(Tiger in Bengali) and Rosy. Rosy had recently returned from West Pakistan, flying from Lahore where she had been with Nashim Banu, a film actor (and mother of Saira Banu) who could not keep her because her neighbours objected. They were both reputed for their ferocity. Locating our house thereafter became very easy. Visitors at the Railway Station only had to tell the rickshaw or tongawallah that they wanted to go to the  “Kukurer Bari,” meaning “House of Dogs!” Taxis were unheard of in those days.

The two ferocious dogs, however, would never enter the Begum ‘s portion of the house. Bagha bit the hand of one of our servants, Hemendra Baruah, when he tried to force Bagha to enter the bedroom of the Begum where two unsuspecting members of the Nawab’s harem had painfully died after being poisoned.

During our stay, two nurses came from Sylhet to sit an examination of the Medical Board. They were put up in the Begum ‘s bedroom. Next morning, they informed Hemendra that they could not sleep a wink. Both their beds started shaking violently as soon as they lay down. They suspected that the house was haunted. Poor girls! I don’t know how they fared at their examination that day for they did not come back!

Mirudi, my eldest sister, who had a weak heart, however, stayed in that part of the house. I, too, used to study in that bedroom, which had a huge writing desk. Maybe the ghosts took pity on me and made sure I passed my Matriculation Examination in the Second division. Thanks to them I stood  first in Latin, after memorizing “Helen of Troy.” I can still tell the story of Helen of Troy but in English!

I stayed in that house with lots of happy childhood memories, even after Ma left for Calcutta with my younger siblings in 1950. At the end of August 1956, I left Dhaka for Dundee, Scotland, at the age of 19.

Ghosts can be friendly and helpful, too! Respect them.

One such friendly ghosts lived in my sister’s home in Darjeeling.

Many years ago, a nephew ( let’s call him Rana ) of my friend Reeta came visiting her. Reeta, stayed (and still does) on the ground floor of Avilion which is a very old bungalow in Darjeeling built by the Britishers in the early 20th century.

This boy, Rana, had a strong sense of ESP. According to him, he was reading a book quite late in the night when he heard light footsteps coming towards him. He thought his Aunt Reeta had come into the room. But when he looked up, he saw a white man standing in front of him. He knew at once that this is not a “real” man. His Aunt had mentioned to him earlier that some spirit hovers around the place.

Initially Rana was quite shocked but on calming down, started talking to the man(apparition) who said his name was John White. I am not sure how the conversation went but John told Rana that he is a good and harmless ghost who has been living in Avilion for several years.