The dreary day lent itself well to our looming task. We drove, four college students, up a snaking drive littered with wooden pavilions, bridges, and benches. They no doubt were a lovely addition to the grounds in the summertime, but in Pennsylvania’s mid-November bleakness they produced an appearance of an abandoned playground. The greyness had seeped even into the dirt.

Perhaps my memory of this image is colored unfairly. Set back behind these sad structures was a government-run nursing home called Gracedale. The four of us had been sent for a class on the science of aging to do “community service.” This translated to us simply chatting with the residents, providing novelty, entertainment, and companionship. It was our first time visiting, and I was filled with nerves, and perhaps even dread. Nursing homes are a heavy reality in the US, and while I was grateful to hear that Gracedale was one of the few remaining homes that charged their residents nothing, I knew that the resources were going to be somewhat limited. I knew the next three hours were not going to be easy to witness. 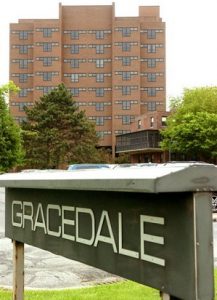 This first time we went, we met Erika. When I first saw her, she was walking down the hallway returning from the bathroom. This may seem like an insignificant detail, but it was a unique sight at Gracedale. All of the other residents we met were unable to walk on their own, if at all. Speaking was very often not possible, let alone hearing. So to see 90-something year old Erika striding down the hall was a pleasant surprise.

Erika was friendly but matter of fact. We didn’t linger too long on small talk. We had received a mini biography of her to spark conversation, and in these few lines we read that she loved two things: animals, and the movie The Titanic. The love of animals was immediately and absolutely apparent: she was wearing a shirt covered entirely in pictures of parrots, and she had ripped off each month of her animal calendar to decorate her fourth of the room she shared with three other women. She mentioned that she had shirts similar to the one she was wearing, just featuring dogs, cats, and cows instead of parrots.

One of us finally asked about The Titanic. It was like someone had flipped on a switch inside Erika’s skull. Her eyebrows raised, her mouth opened slightly. She was incredulous that we should know of her passion for the movie. We explained how we came by the information, but her excitement did not wane. Our expectations were quite mundane- how interesting can a conversation about The Titanic be? 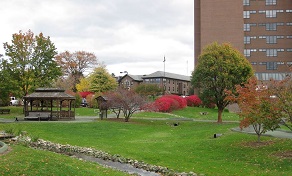 Erika explained that yes, she loved the movie, but there was more to it than that. She slowly unfolded her truth: she believed that in a past life, she was on the actual, historical Titanic. She said that she had a real connection to the ship and some of the passengers she had read about the past. There was no indication that this was a belief born of old-age lunacy, and her quirks continued to reveal themselves. Erika was an immigrant to the US from Hamburg, Germany and proudly proclaimed herself a “hamburger.” She had a deep belief in and fascination with ghosts and spirits. She told me a detailed story about how she had spoken to the ghost of her father in her childhood bedroom years after his passing. She opened her drawer to show me her stack of books that were exclusively of haunted encounters and haunted places around the US. Having been born in Germany, she was a proud bilingual and gave the nurses playful attitude exclusively in German. She was annoyed by the weekly meal choices she had to go through because it “felt like homework.” She had visited Germany once, four years after the war ended, and “could still smell the bombs.”

At the end of the semester, when I wouldn’t be coming regularly anymore, I bought Erika a large-print book about the Titanic.

On our third visit, we met Joan. Joan was a tiny woman overflowing with personality. She couldn’t hear a word we said, so we were blessed with her musings that followed an emotionally perilous, but reliable, arc. She would start with the high: “I love life.” Over and over she would declare this, with almost the frequency of her exhales. She had a penchant for dirty jokes, relishing the shocked expressions they provoked on our faces. She would lean back and giggle, with all the exuberance of a little girl. This high would inevitably come racing downward, with her “I love life” catchphrase shifting to “I’ve lived too long.” She would recall her difficult childhood in precise detail. She recounted memories of her abusive father and money troubles. One story always brought this trough to its end, signaling to us that her emotions would soon be soaring again. Her father had come home drunk and left a trail of vomit behind him. Her mother was on her hands and knees scrubbing. Joan’s bite and vivacious spirit would return with her punchline, “If it was me in my mom’s place, I would have made him eat it.

These women were a testament to the vitality of the elderly. During that semester I saw people and heard stories that stay with me even to this day. Most were utterly heartbreaking. One resident was asked how long she had been at Gracedale. Her daughter was there for a visit and answered for her, “Three years.” I will never be able to forget the resident’s look of shock as she turned to daughter and repeated, horrified, “It’s been three years?” I left that hospital-like building behind me every week heavier than I entered it, but I also left having been witness to Joan’s conspiratorial giggles and Erika’s steadfast sense of belief. It would be an injustice not to remember it in its robust and complex entirety.