When I look back on my life I begin to wonder if I have achieved anything of consequence.  To my sorrow I had borne no children but I had enjoyed a very fulfilling life in other ways, particularly in the opportunities offered me by Australia.   In 1958, at the age of 34, after years of getting nowhere in particular, I decided to migrate to Australia under the Ten Pound Pom scheme.  I could not have foreseen that in the 50 years I was to spend in that country, I would be helping to pioneer a tourist venture before ‘going back to school’ as a mature age student.

For two years I worked my way around Australia’s southern States before taking a job in a safari camp in the wild, rugged country of Western Arnhem Land in the Northern Territory.   Access to the camp some 300 miles east of Darwin was along a rough bush track where buffaloes sometimes barred the way and kangaroos leapt alongside the vehicle.  Flooding of the track in the Wet Season, however, meant such access was cut off but the safari camps, buffalo farms, and Mission Stations in the region all had their own airstrip and were in contact with the outside world by two-way radio.
The camp where I worked, known as Nourlangie Safari Camp, catered for rich Americans seeking a trophy of a pair of buffalo horns or a crocodile skull to mount on their walls back home.  One of the guides at the camp was a crocodile hunter called Tom who was about to play a large part in my life.  I was employed at the camp as chief cook and bottle washer but often had the chance to join the guests exploring the cave country with its Aboriginal wall paintings dating back thousands of years and was also taken on hunting expeditions.  I hated watching the killing part of it but often lent a hand at skinning the slain beasts.  I did, however, love joining in the fishing trips undertaken to various crocodile infested waters.  One billabong, known as Yellow Waters because of the yellow weeds which covered part of it, became my favourite with its jabirus strutting to the waters edge and crocodiles cruising with just their eyes showing above the water.   At sunset, the water literally glowed while the sun sank below the horizon.
Unfortunately such pleasure was not to last as a couple of seasons later the camp ran into financial difficulties and had to close.  Neither Tom nor I wanted to leave this magical region and began to dream of setting up our own non-safari style tourist venture in the Yellow Waters area so that others could share in what this spectacular piece of country had to offer.   Perhaps, one day, we could introduce boat cruises on Yellow Waters where passengers could enjoy the sight of crocodiles swimming around the boat.  We planned to start out with a little trading post and in 1964 our adventures began1.  Financial and other difficulties plagued us for many years but the business grew as bitumen roads and bridges in the region were built.  Our dream was complete when we eventually ended up with a fully licensed Motel we called the Cooinda Motel (Cooinda being an Aboriginal term meaning Happy Meeting Place.) Our time in the bush ended when the business got beyond our capabilities to handle successfully and, in 1978, we sold to the traditional owners association, known as the Gagadju Association, who were able to take it up several notches in comfort and management. 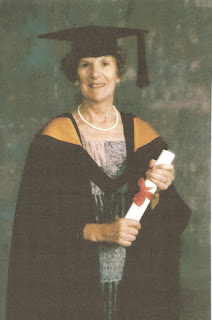 After the sale we retired but sadly Tom died in 1982 and I found myself at a loss to know what to do with the rest of my life.  For some years I ran a souvenir shop in Darwin making frequent trips to Cooinda, enjoying watching the crocodiles cavorting on Yellow Waters, chatting with Aboriginal friends and being amazed at how modernised the Motel had now become in the recently proclaimed Kakadu National Park.  Then suddenly I had an urge to catch up on the higher education I’d missed out on because of war disruptions in the 1940’s.  I dared to apply to enrol in a degree course at the Northern Territory University (later to be known as Charles Darwin University) and to my acute joy was accepted on probation.  I closed down my shop and in 1990, at the age of 66, I became a Mature Age Student in archaeology/anthropology.
My studies continued happily over the next few years and, in 1996, I was awarded my Bachelor of Arts followed by my BA Honours in 1998.  Finally, in 2008, with the aid of a scholarship, I achieved my doctorate.  Shortly after that, with 50 years of life in Australia behind me, I returned to England.   I was hardly employable at the age of 92 so the question now was how would I be able to put to use all I had learned?  Or had I simply been wasting my time and the time of all those others who had helped me through? Then it occurred to me that by making known my experiences of the amazing academic stimuli provided at Charles Darwin University, augmented by the  exotic beauty of Kakadu National Park, it might encourage others to seek and find a similar joy in that location.  Then, in their more appropriate age group, they could make a better practical and wide-ranging use of their studies than I was now able to do?
Such ideas, I thought, might interest not only school leavers but the mature aged and even war veterans.  Many school leavers in England or the Continent intending going on to University may also be visiting Australia in their gap year.  Why not include a short course at CDU, perhaps in hospitality, which would look well on their CV.  Those of mature years might find a satisfying outlet for their continuing energy by possibly indulging in a full four year course.  Even in their 60’s there was still a 20 year career time ahead of them.  War veterans, perhaps unsettled and at a loose end, could change their world by pursuing an educational adventure.  Their fighting experiences may well have opened them up to the need and usefulness of humanitarian and community studies and they could thereby help in the making of a less fractious world by getting involved in international relations in some corner of the globe.  If anyone takes up the idea of studying at C.D.U., finds a Course2 that interests them and then spreads such broadened knowledge where they see fit, I believe I will have achieved something useful in my life.
Judy Opitz lives in Cambourne